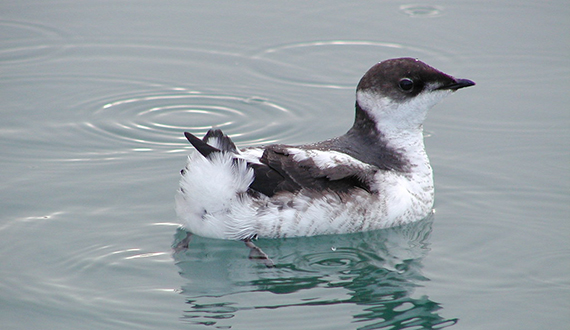 In 1974 at California's Big Basin Redwood State Park, the marbled murrelet — the “enigma of the Pacific” — won the distinction of being the last bird species in the United States to have its nesting site discovered. This came on the heels of more than a century of searching by early ornithologists for the elusive murrelet “nest.” Actually, though, rather than building a nest, this seabird travels inland as much as 50 miles to lay a single egg high in the old-growth forest canopy, which it depends on for survival. But as old-growth forests have declined, so too has the murrelet, with commercial logging representing the greatest threat to the species, followed by climate change, oil spills and entanglements in gillnets.

For years, the Center has defended the marbled murrelet from its top threat: In 2005, we filed suit against a logging company and the state of California for harming the bird and its forest home, and in 2008 we succeeded in halting a timber-industry attack on the bird's Endangered Species Act status — a lawsuit to remove protections based on a finding that was scientifically flawed due to political interference under the Bush administration. We halted another attack in 2013, as well as filing a lawsuit against the California Department of Parks and Recreation for its failure to protect the murrelet under a new management plan for Big Basin Redwoods State Park in California's Santa Cruz Mountains.

But the marbled murrelet wasn't out of the woods yet. The Fish and Wildlife Service found merit in a timber-industry petition to remove the bird's protections based on the same unscientific finding proved tainted in February 2008. Fortunately, after the Center and a coalition of conservation partners demanded that the Service uphold the murrelet's protections, in 2009 the agency released a report finding that murrelets in Washington, California and Oregon still need federal safeguards, due mostly to the extensive logging of their Northwest old-growth habitat. In August 2016 the Fish and Wildlife Service finalized protections on nearly 3.7 million acres of critical habitat in Washington, Oregon and California for the marbled murrelet, firmly barring the timber industry from attempts to open up more federal lands within this area for logging.

We've requested that the Service upgrade the bird's status frmo "threatened" to "endangered" and expand protections to include more of the species' dwindling populations, and we continue to defend those populations from logging. In May 2012, we and allies filed a lawsuit charging that Oregon's clearcutting practices illegally harm marbled murrlets within the Tillamook, Clatsop and Elliott state forests. In November of that year, the state of Oregon suspended logging on 914 acres of old-growth murrelet habitat on the Elliott. A judge halted logging on all three forests pending the resolution of our case.

Search our newsroom for the marbled murrelet