We're in the midst of the Earth’s sixth mass extinction crisis. Harvard biologist E. O. Wilson estimates that 30,000 species per year (or three species per hour) are being driven to extinction. Compare this to the natural background rate of one extinction per million species per year, and you can see why scientists refer to it as a crisis unparalleled in human history.

The current mass extinction differs from all others in being driven by a single species rather than a planetary or galactic physical process. When the human race — Homo sapiens sapiens — migrated out of Africa to the Middle East 90,000 years ago, to Europe and Australia 40,000 years ago, to North America 12,500 years ago, and to the Caribbean 8,000 years ago, waves of extinction soon followed. The colonization-followed-by-extinction pattern can be seen as recently as 2,000 years ago, when humans colonized Madagascar and quickly drove elephant birds, hippos, and large lemurs extinct [1].

The first wave of extinctions targeted large vertebrates hunted by hunter-gatherers. The second, larger wave began 10,000 years ago as the discovery of agriculture caused a population boom and a need to plow wildlife habitats, divert streams, and maintain large herds of domestic cattle. The third and largest wave began in 1800 with the harnessing of fossil fuels. With enormous, cheap energy at its disposal, the human population grew rapidly from 1 billion in 1800 to 2 billion in 1930, 4 billion in 1975, and over 7.5 billion today. If the current course is not altered, we’ll reach 8 billion by 2020 and 9 to 15 billion (likely the former) by 2050.

No population of a large vertebrate animal in the history of the planet has grown that much, that fast, or with such devastating consequences to its fellow earthlings. Humans’ impact has been so profound that scientists have proposed that the Holocene era be declared over and the current epoch (beginning in about 1900) be called the Anthropocene: the age when the "global environmental effects of increased human population and economic development" dominate planetary physical, chemical, and biological conditions [2].

The authors of Human Domination of Earth's Ecosystems, including the current director of the National Oceanic and Atmospheric Administration, concluded:

"[A]ll of these seemingly disparate phenomena trace to a single cause: the growing scale of the human enterprise. The rates, scales, kinds, and combinations of changes occurring now are fundamentally different from those at any other time in history. . . . We live on a human-dominated planet and the momentum of human population growth, together with the imperative for further economic development in most
of the world, ensures that our dominance will increase."

Predicting local extinction rates is complex due to differences in biological diversity, species distribution, climate, vegetation, habitat threats, invasive species, consumption patterns, and enacted conservation measures. One constant, however, is human population pressure. A study of 114 nations found that human population density predicted with 88-percent accuracy the number of endangered birds and mammals as identified by the International Union for the Conservation of Nature [4]. Current population growth trends indicate that the number of threatened species will increase by 7 percent over the next 20 years and 14 percent by 2050. And that’s without the addition of global warming impacts. 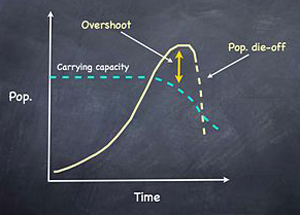 When the population of a species grows beyond the capacity of its environment to sustain it, it reduces that capacity below the original level, ensuring an eventual population crash.

"The density of people is a key factor in species threats," said Jeffrey McKee, one of the study’s authors. "If other species follow the same pattern as the mammals and birds... we are facing a serious threat to global biodiversity associated with our growing human population." [5].

So where does wildlife stand today in relation to 7.5 billion people? Worldwide, 12 percent of mammals, 12 percent of birds, 31 percent of reptiles, 30 percent of amphibians, and 37 percent of fish are threatened with extinction [6]. Not enough plants and invertebrates have been assessed to determine their global threat level, but it is severe.

Extinction is the most serious, utterly irreversible effect of unsustainable human population. But unfortunately, many analyses of what a sustainable human population level would look like presume that the goal is simply to keep the human race at a level where it has enough food and clean water to survive. Our notion of sustainability and ecological footprint — indeed, our notion of world worth living in — presumes that humans will allow for, and themselves enjoy, enough room and resources for all species to live.

Help support our cutting-edge work in the Population and Sustainability Program.

+ PUBLICATIONS
Sanderson et al., The Human Footprint and the Last of the Wild

McKee, Brother, Can You Spare a Species?