Growing just an inch or 2 or 3 inches annually, Joshua trees take 30 or more years to before they can flower or reproduce. 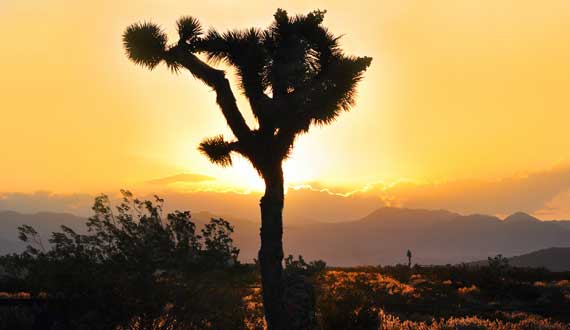 With their twisted stalks and otherworldly outlines, Joshua trees look straight out of an alien landscape or a Dr. Seuss book. But lucky for us, these amazing icons of California’s Mojave Desert are right here on Earth.

Unfortunately, without proper protection, they may not be here much longer.

You often hear that Joshua trees aren’t actually trees, but they’re as much a tree as a palm tree is. In the Yucca genus, they’re a type of grass-like flowering plant called a monocot. Joshua trees comprise two distinct species: the western Joshua tree (Yucca brevifolia) and the eastern Joshua tree (Y. jaegeriana). They live in different areas, are genetically and morphologically distinct, and are pollinated by different moth species.

The most visible threat to western Joshua trees is direct killing by developers, who bulldoze them by the thousands to build roads, warehouses, power plants, strip malls and vacation rentals. But climate change and fire are also pushing the species toward extinction on a landscape scale. Recent studies show Joshua trees are dying off because of hotter, drier conditions, with very few younger trees becoming established in many areas. Even greater changes are projected over the coming decades, and scientists say these beautiful, fragile icons could be largely gone from Joshua Tree National Park by the end of the century.

Prolonged droughts are projected to be more frequent and intense over the coming decades, shrinking the species’ range and leading to more tree deaths. Higher elevations, where Joshua trees might survive increasing temperatures and drying conditions, are at great risk of fire due to invasive non-native grasses.

Over 40% of the western Joshua tree’s range in California is on private land, with only a tiny fraction protected from development. Current projections show that virtually all of this habitat will be lost without stronger legal protection for the trees.

The Center is working hard to save Joshua trees in the face of threats from climate change, fire and development.

After our 2019 petition to protect western Joshua trees under the California Endangered Species Act, the next year the California Fish and Game Commission voted unanimously to make them “candidates” for protection. Under state law, candidate status gives species interim protections while a separate agency, the California Department of Fish and Wildlife, analyzes their situation to recommend whether to advance them toward full protection.

In 2022 — after a judge rejected development interests’ attempt to overturn the trees’ candidate status — the California Department of Fish and Wildlife released a legally and scientifically flawed status review recommending an end to their interim protection. This would open the door to widespread destruction of one of California’s most beloved species.

The report acknowledged that climate change and other threats are harming western Joshua trees, but then somehow concluded that the species disappearing from its namesake national park (and most of the rest of its range) in the coming decades was “not significant.”

The California Fish and Game Commission will vote on whether to protect western Joshua trees or end their protections at its meeting on June 16, 2022.

If western Joshua trees win permanent protection under the California Endangered Species Act, state and local agencies will have to manage threats to them, including developing a recovery plan outlining a strategy to protect the species in the face of climate change and other threats.

We’re not done fighting to make sure these amazing plants get the protection they need. In the meantime, we’ll defend these trees from individual threats to their habitat, from wildfire to mining to development.

Check out our press releases to learn more about the Center's actions to save Joshua trees.

Because Joshua trees don’t have annual growth rings, it’s very hard to age them. We don’t know how old the oldest Joshua tree is, but they can live upwards of 300 years.

Many say 19th-century Mormon settlers named these plants after the biblical Joshua because their branches looked like his arms, raised toward heaven.

The Joshua tree was so inspirational to the band U2 that they named one of their most famous albums after it.

Joshua trees are thought to need a winter freeze to bloom.

Because their wood is lightweight, soft and brittle, many Joshua trees in the Antelope Valley were cut down in the early days of Hollywood filmmaking to build breakable movie sets.