Bats are the only mammals capable of true flight. 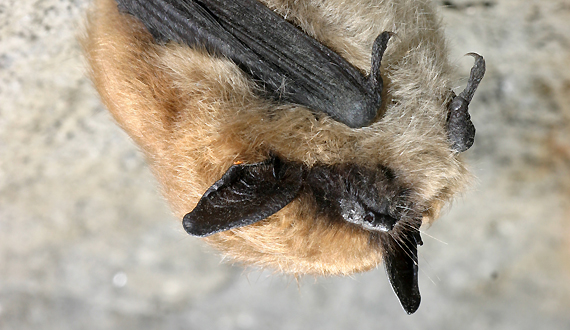 We're calling on you to become a Bat Advocate and help us save bats across the country from deadly white-nose syndrome. Visit our new Save Our Bats website now.

Long considered rare within its range in the eastern United States, the eastern small-footed bat has been faced over the past few years with a new threat, called white-nose syndrome, that has made it even scarcer. White-nose syndrome is a newly emergent fungal disease that attacks bats while they hibernate in caves and mines. Nearly 7 million bats of six different species are estimated to have been killed since 2006, when the disease was first documented in a cave near Albany, New York.

While the estimated 12 percent decline of the eastern small-footed bat from white-nose syndrome has been less severe than for other affected bat species, it still constitutes a major loss that, compounded with other threats, puts the species in serious jeopardy. Eastern small-footed bats are strongly associated with rocky cliffs, talus slopes, and shale fields, where they roost under rocks and in crevices during the day. Because of their dependency on these naturally rare ecological features, small-footed bats are at particular risk from mining, quarrying, oil and gas drilling including hydrofracking, and other mineral extraction, as well as logging, sprawl, highway construction, wind energy and other forms of agricultural, industrial and residential development.

The eastern small-footed bat is one of North America's smallest bats, and also one of its hardiest. Individuals weigh one to two tenths of an ounce and are about three inches in length. Their feet, as the name suggests, are very small — about a quarter of an inch long. The species is among the last to enter hibernacula in the fall, and the first to leave in the spring, with a hibernation period from approximately November through April.