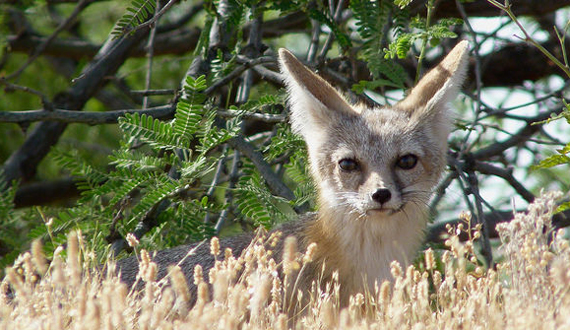 Despite their dainty appearance, desert kit foxes are hardy animals, well adapted for living in the hot, harsh desert habitat from which they never stray. This cat-sized kit fox subspecies has long, delicate ears to radiate heat (and for great hearing); a grayish coat for camouflage; a light, slim body and short legs for quick dashes after prey; and even fur on its paw pads, for traction in the desert sands and protection from their scalding surface. Desert kit foxes use water efficiently and don't drink much, getting most hydration from food they consume. They're primarily active during the cool night, lounging by day in burrow systems where they take refuge from hot and cold temperatures as well as from predators, including coyotes and golden eagles.

You can see the keyhole-shaped entrances of kit fox burrows scattered across a wide area of California's Mojave and Colorado deserts. But these wild-canine quarters are increasingly empty — or destroyed — due to large-scale industrial energy development rapidly on the rise across the kit fox range. Even smart, climate-saving clean-energy development like solar projects are often badly sited and destroy important kit fox habitat — and also, possibly, help spread kit fox-killing diseases like canine distemper: In Riverside County in 2011 and 2012, the first-ever documented outbreak of the disease in desert kit fox caused a local die-off when it hit desert kit foxes in an area surrounding the Genesis Solar energy development site. Other threats to the foxes abound, including grazing, urbanization, agriculture, climate change and mortality from vehicles on roads that are increasingly crisscrossing their range — as well as off-road vehicles that drive over dens, potentially causing cave-ins that crush kit fox pups.