GIVE TODAY
This dolphin is born gray and gradually becomes pink or white with age, while its gray pigmentation turns into mottled spots (and sometimes fades away altogether). 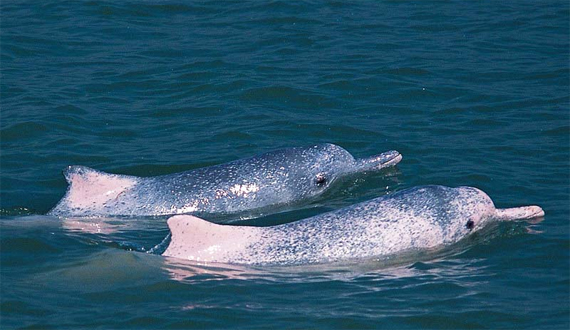 The Taiwanese humpback dolphin is a critically endangered marine mammal — with fewer than 100 individuals remaining — living along the densely populated west coast of Taiwan. It's among the shrinking population of small cetaceans around the world, including the endangered vaquita in the Gulf of California, that face dire threats to their survival.

Despite facing imminent extinction, these dolphins were denied Endangered Species Act protection in 2014 by the National Marine Fisheries Service, which didn't recognize them as a distinct population. But subsequent taxonomy revisions now identify the Taiwanese humpback dolphin as a subspecies of the Chinese white dolphin — so the Center and allies petitioned the Fisheries Service to reconsider listing in March 2016. In response to our petition, two months later the agency found that listing may be warranted and announced the launch of a full review of the species' status.

Taiwanese humpback dolphins stick to the shallow coastal and estuarine waters off west Taiwan, rarely venturing out into deeper waters toward mainland China. Their limited range has made them susceptible to a variety of threats on the busy Taiwan coastline, including boat traffic, pollution, industrial and agricultural runoff, habitat destruction, underwater noise and fishing nets. The species is considered critically endangered by the International Union for Conservation of Nature, but if it's to be saved from extinction its precarious status must also be recognized by the United States, a key ally of Taiwan.

Also known in Taiwan as the Chinese white dolphin (like its cousins) or Matsu's fish, this biologically and culturally important species is technically protected by Taiwan, but that designation hasn't reduced the threats it faces. We hope the extinction of the baiji, or Yangtze river dolphin, around 2006 will serve as an alarm to prevent the extinction of this small and unique dolphin population off Taiwan.