GIVE TODAY
Kangaroo rats like dust baths. Small dusting spots are often found near their burrows. 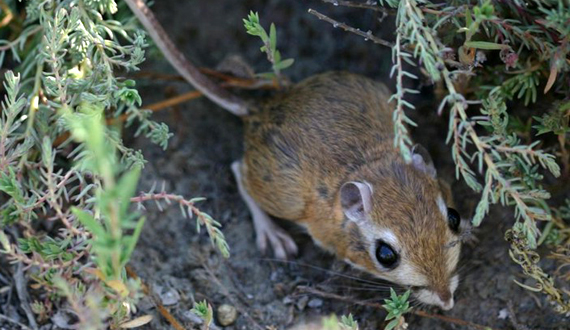 Bouncing around on their giant hind feet, seed-eating San Bernardino kangaroo rats are highly adapted to southwestern deserts and the natural flood cycles found there. Though these kangaroo rats require only the moisture in their food to survive, the triple threat of dams, sand and gravel mining, and urban sprawl has driven the charismatic critters to the brink of extinction. Kangaroo rats are known to use their hind feet to create their very own Morse code to send warning signals to fellow rats, and what greater danger is there than the imposing habitat destruction wreaking havoc across Southern California?

In 1999, the Center came bounding to the aid of San Bernardino kangaroo rats with a lawsuit that eventually secured federal protections in the form of 33,295 acres of critical habitat. But while a scientific review panel originally concluded that additional critical habitat should be designated for San Bernardino kangaroo rats, the U.S. Fish and Wildlife Service, under pressure from development and mining interests, has repeatedly attempted to undermine this desert dweller's future by removing hard-won protections. In October 2008, the Service in fact slashed the species' critical habitat by a shocking 76 percent. Three months later, we sued, and in 2010 a federal court reinstated the scientifically valid decision to protect more than 33,000 acres.

Besides fighting for federally protected habitat for the rodent, the Center has also effectively litigated to provide the animal with permanent protection from urban sprawl. A lawsuit we filed resulted in 1,200 acres of quality kangaroo rat habitat being saved from development at Lytle Creek. The construction of a planned “mini-city” for this area would have jeopardized the species' continued survival. We've also launched a lawsuit to save the species from a massive water-development project within the San Jacinto River channel, in the heart of the one of three remaining places in the world that support a viable population of San Bernardino kangaroo rats.