Bobcats have white patches on the back of their ears, which are thought to serve as visual guides for young cats following their mothers at night. 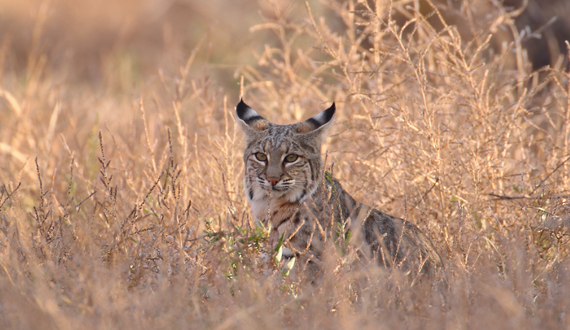 Intrepid, adaptable predators, bobcats are solitary hunters who stalk and ambush their prey using patience, speed, and precision. Yet these stealthy felines are no match for the development rapidly destroying their habitat nor the poaching brought about through the high demands of the international fur trade. Although bobcat pelts have been illegally transported from Mexico into the United States, no census has been conducted to show how many Mexican bobcats have been trapped, shot, or poisoned. Nobody knows what this means for the species' future.

The Mexican bobcat, the southernmost subspecies of bobcat, has been classified as an endangered species since 1976, but under pressure from the National Trappers Association, the Bush administration proposed its delisting — an action that would legalize the importation of Mexican bobcat furs into the United States.

In 2003 the Center first submitted comments opposing a petition to remove protections for the Mexican bobcat, which helped keep this wild cat on the list of threatened and endangered species. A few years later, the U.S. Fish and Wildlife Service officially proposed delisting the Mexican bobcat, and we filed additional scientific comments in opposition.