Brown bears actually come in a range of colors, from light cream to brown to almost black. 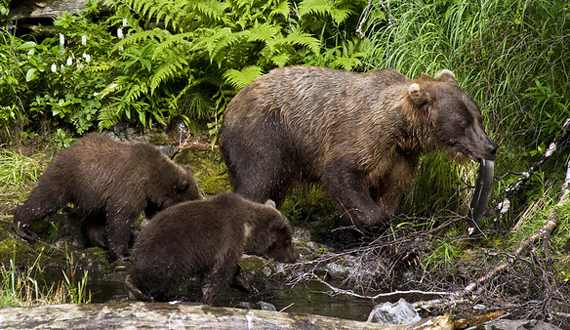 The Kenai Peninsula brown bear is a majestic symbol of the North American wilderness and Alaska, respected for its power, intelligence and beauty. Kenai brown bears are a unique and isolated population of fewer than 600 bears that is vulnerable to rapid decline and extinction and is now in the crosshairs.

Starting in 2013, the Alaska Board of Game started ramping up efforts to reduce or even eliminate Kenai brown bears by allowing an unsustainable number of bears to be killed through sport hunts — even allowing bears to be killed over bait. Fortunately much key bear habitat on the Kenai Peninsula is federally managed by the Kenai National Wildlife Refuge, and the refuge can ban sport hunting on its lands if too many bears are being killed.

The refuge did just that in 2013, after 71 bears were shot during the hunt, with an estimated 28 additional bears killed but unreported. The Center applauded the refuge's decision and submitted comments urging it to permanently ban sport hunting.

In the spring of 2014, when the Alaska Board of Game approved brown bear baiting, a high death toll was inevitable. Before the spring hunting season began, the Center and more than 43,000 of our members and activists urged the refuge to permanently close its lands to brown bear sport hunting.

As expected, in the spring of 2014, many bears died. Fifty-two were killed by hunters —and more than 70 percent of those killings occurred at bait stations.

In summer 2014, about 46,000 of the Center's members and activists once again urged the refuge to close sport hunting on its lands, prior to the September 1 opening of the fall hunting season. The Center also submitted a rulemaking petition to the refuge, asking that it begin a process of official rulemaking that would result in a permanent ban on sport hunting.

This time, our voices were heard. The day after we submitted our petition, the refuge proposed a one-year ban to sport hunting on its lands that would cover both the fall 2014 and spring 2015 hunting seasons. The refuge stated that far too many bears had already been killed, resulting in long-term impacts to this small population.

The Center continues work to ensure that brown bears will roam across the Kenai for generations to come.