GIVE TODAY
Although martens are in the mustelid family with skunks and other powerfully musky species, the marten's odors are barely perceptible to humans. 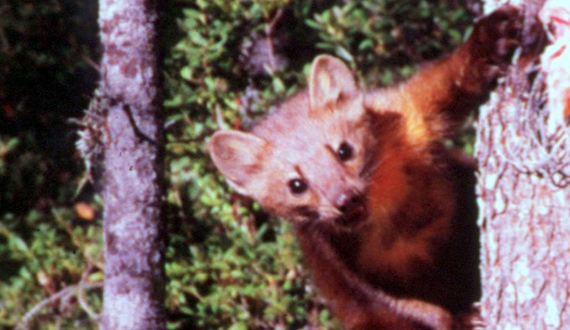 DESCRIPTION: Martens have medium-length glossy fur that ranges from tan to chocolate in color, with a lighter-colored throat patch and underfur and darkly furred legs and tail. The Humboldt martens in coastal northwestern California are on the smaller end of the American marten size range, with an average weight of 889 grams for males and 598 grams for females. These martens are slender, 1.5 to 2 feet long, and have large triangular ears and a long tail.

HABITAT: Humboldt martens are very strongly associated with closed-canopy, old-growth forests with complex structure on or near the ground. Martens are known to avoid younger forests and open areas such as clearcuts, as well as fragmented areas. They will not cross large areas with low canopy closure. Martens also require old-growth elements for denning sites. Kits are weaned at 42 days, emerging from their dens at 50 days to begin foraging independently.

RANGE: In California, the Humboldt marten historically occurred in coastal forests from Sonoma County, California north to the border of Curry County, Oregon. The marten also once occurred throughout coastal Oregon forests. Today, the subspecies has been extirpated from 95 percent of its California range and exists only in west-central and extreme southwestern Oregon.

MIGRATION: This species is nonmigratory.

BREEDING: Martens mate from late June to early August, with most mating occurring in July; they give birth in March and April.

LIFE CYCLE: Martens can live up to 14.5 years in the wild.

THREATS: The primary threat to the Humboldt marten is logging of old-growth and coniferous forests, which eliminates, degrades and fragments its remaining habitat. The animal is also at risk from small population size and low genetic variability, wildfire, predation, climate change and legal trapping in Oregon.

POPULATION TREND: This subspecies has undergone drastic decline. In California, it appears to have declined by more than 40 percent from 2000 to 2008. In Oregon, the marten has been lost throughout the vast majority of its historic range and are likely extirpated from the northwestern portion of the state.