Mountain lions are born in litters of two to four cubs, which the mother raises alone. 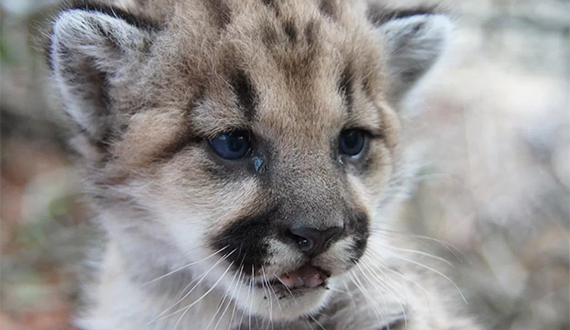 The resilient mountain lion goes by many names: puma, cougar, panther, catamount and even “ghost cat.” Over the past century in California, it has survived habitat loss and government-sponsored extermination campaigns that wiped out the state’s grizzly bears and gray wolves.

But today mountain lions in Southern California and along the Central Coast are gravely threatened by habitat loss and fragmentation from freeways and rampant sprawl development.

We’re working to save these iconic cats.

Hemmed in by highways and killed by cars, California’s cougars are isolated in small, unsustainable populations. Barriers prevent young mountain lions from migrating in or out to establish their own home ranges and find mates.

That’s causing dangerous inbreeding and genetic-diversity declines, leaving some mountain lion populations vulnerable to extinction. In fact, some could disappear in just 15 years if inbreeding gets worse.

In response the California Department of Fish and Wildlife recommended in 2020 that listing may be warranted. The Fish and Game Commission voted two months later to accept the department’s recommendation and advance these populations to candidacy. Protections are in place while state biologists are conducting a status review for the vote on formal listing in 2021.

At the local level, with the Center’s support, Ventura County adopted a first-of-its-kind ordinance to protect habitat connectivity and wildlife movement corridors for mountain lions and other species. The ordinance was challenged in court by industry groups, and the Center has joined a coalition of conservation organizations to defend it.

We also continue to fight individual projects that threaten California mountain lions. In 2018 we led a coalition challenging the Altair development, which would have further isolated the already dwindling Santa Ana puma population, and obtained a legal agreement in October 2020 to protect a critical wildlife corridor after a favorable court ruling. In 2021 judges blocked two other projects that we filed suits against, the Northlake and Centennial developments that would have harmed mountain lions and wildlife connectivity while increasing wildfire risk.

After two young puma brothers left their mom, they were boxed in and killed because of roads and development fragmenting their California habitat. To save these iconic big cats, state and local agencies need to improve habitat connectivity.

Take action now to help mountain lions and other animals.

Check out this cool film miniseries on California's mountain lions.

• They're more closely related to domestic cats than to African lions and tigers.

• Mountain lions have excellent night vision but a poor sense of smell.

• These wild cats are opportunistic hunters. Although their main prey is deer, they've been known to eat bobcats, coyotes, wild pigs, turkeys, raccoons, skunks and even porcupines.

• Mountain lions feed forests. They hide their large kills under debris, often near trees, which provide food for several days not only for the lion who hid it but also for many scavengers, including bears, foxes, hawks and beetles. The carcasses are also a likely source of nutrients for trees and other vegetation.