GIVE TODAY
The Bartram's scrub-hairstreak doesn't wander far from its host plant, the pineland croton; in fact, the butterfly is usually spotted no farther than 17 feet away from it. 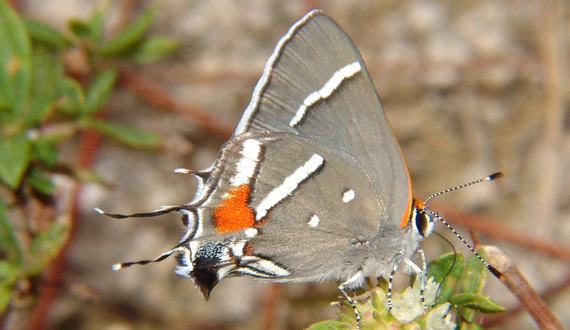 About an inch long, the Bartram's scrub-hairstreak butterfly is gray, which helps it blend in with its pine rockland surroundings in South Florida and on Big Pine Key in the Florida Keys. But it's far from drab, easily identifiable by the splashes of rust and the white and black lines on its wings.

Though this butterfly never strays far from its host plant, the pineland croton, it can be spotted throughout the year. Males and females are about the same size, but they exhibit some differences in coloration: The males' abdomens are bright white, while the females' are gray.

Once abundant throughout South Florida's Miami-Dade and Monroe counties, the Bartram's scrub-hairstreak's habitat is now quite limited. The species is particularly threatened by development, nonnative species, mosquito control and butterfly collecting, but it also faces threats from rising seas that could swallow up its habitat on Big Pine Key in the Florida Keys.

Luckily for the Bartram's scrub-hairstreak, it's one of the numerous species that has benefitted from our 2011 agreement with the Fish and Wildlife Service pushing the agency forward on Endangered Species Act decisions for 757 plants and animals. Following that settlement, this insect was federally protected in 2014.