GIVE TODAY
Protection of least chub habitat would benefit several other imperiled species, including the Columbia spotted frog and the Ute ladies' tresses orchid. 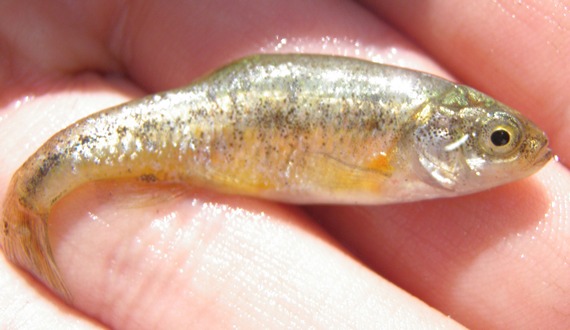 Several millennia ago, western Utah was covered by the ancient Lake Bonneville. Today its broad alluvial desert basins are scattered with springs still teeming with life. The colorful, pocket-sized least chub depends on these vulnerable waters. Once described as excessively common, the species is receding drastically: After hundreds of surveys of prime least chub habitat, only six wild populations are now known.

Recognizing the imminent threat of extinction, more than a decade ago the U.S. Fish and Wildlife Service proposed to list the minnow-like fish as an endangered species. Unfortunately, the Service delayed the process and later caved to political pressure, doing nothing to safeguard the least chub in its rapidly dwindling aquatic habitat. So in 2007, the Center and other groups filed a citizen petition to have the least chub protected under the Endangered Species Act, and when the Service failed to respond, we sued. In 2010, the Service officially recognized that the chub warrants protection — but instead of protecting it, the agency put the fish on the “candidate list” to await Endangered Species Act status indefinitely.

Despite well-intentioned conservation measures initiated by the State of Utah, the least chub still faces the looming threat of expansive groundwater pumping in the Snake Valley, situated near the Utah-Nevada border and home to half of the entire least chub population. Without considering this fragile species, the water supply is intended to meet the demands of a sprawling metro Las Vegas. Because least chub live in spring-fed pools, which require stable aquifers, the annual 200,000 acre-feet of water that the Southern Nevada Water Authority proposes to pump could mean life or death for this rare fish. And because dozens of other species also depend on spring-fed pools for survival, the success or failure of the Center's work to save the chub may have far-reaching implications.