The Clear Lake hitch isn't your average-sized minnow -- it weighs in at almost a pound. 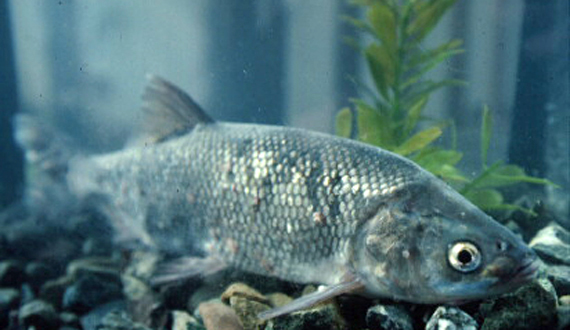 Found only in Northern California's Clear Lake and its tributaries, the Clear Lake hitch isn't your average-sized minnow: It weighs in at almost a pound. Hitch migrate each spring, when adults make their way upstream in tributaries of Clear Lake to spawn before they return to the lake. Millions of hitch once clogged the lake's tributaries during spectacular spawning runs, and these biologically significant masses were a vital part of the lake's ecosystem, an important food source for numerous birds, other fish and wildlife. Hitch were once so plentiful that they were a staple food for the Pomo tribes of the Clear Lake region.

Clear Lake hitch have declined precipitously in abundance as the ecology of their namesake lake has been altered and degraded. By the time regular surveys of hitch spawning began, hitch abundance had plummeted one-hundred fold. Now only a few thousand hitch make the annual spawning run. The fish once spawned in every tributary to Clear Lake but now are able to spawn in significant numbers in only two streams in the Big Valley drainage south of Clear Lake, in Kelsey and Adobe creeks. Clear Lake hitch have declined due to loss of spawning habitat and nursery areas, migration barriers that block passage to spawning grounds, alteration of creek habitat, in-channel mining, temporary road-building through channels, water pumping, predation by and competition from introduced invasive fish, and the impacts of pollutants.

In response to our petition, finally in 2020 the U.S. Fish and Wildlife Service announced that Endangered Species Act protections for this fish were "not warranted" — a determination based on misinformation that contradicts the conclusions of native fish experts as well as the findings by the California Department of Fish and Wildlife and California Fish and Game Commission. We'll keep fighting to get the Clear Lake Hitch the fderal protections it deserves and needs to escape extinction.