GIVE TODAY
Humboldt penguin populations were first devastated by the mining of guano deposits -- in which the species prefers to nest -- for fertilizer. 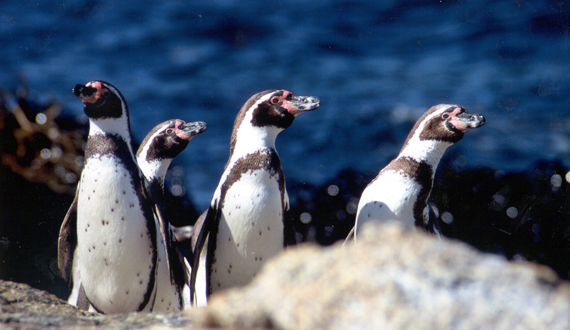 DESCRIPTION: This medium-sized penguin grows to be about 26 to 28 inches long and weighs about 10.4 pounds. It has blackish-gray upperparts, white underparts, a black breast band, and a black head with white stripes running from the eyes around the ear-coverts to join beneath the chin. The bill is mostly black, but light-pink at its base. Juveniles have dark heads and no breast band.

HABITAT: This penguin nests on islands and rocky coasts and feeds in surrounding waters. Its habitat is highly influenced by the cold, nutrient-rich Humboldt Current flowing northward from Antarctica, which is vital to the productivity of plankton and krill and fosters fish abundance.

RANGE: The Humboldt penguin lives along the coasts of Chile and Peru in the southeastern Pacific Ocean. Range Map

MIGRATION: When not raising chicks, these penguins have been known to travel long distances at sea to find food, especially in recent years as prey species become increasingly scarce.

BREEDING: Humboldt penguins can breed at any time of year, usually digging burrow-like nests among piles of guano in caves and along cliffs. Females lay one or two eggs, which are incubated for about 40 days by both parents, but one chick often dies of starvation. Chicks fledge after about 70 to 90 days and molt into adult feather about a year later.

LIFE CYCLE: This penguin's lifespan is about 20 years.

THREATS: Humboldt penguin populations were first devastated by the mining of guano deposits — in which the species prefers to nest — for fertilizer. Through the mid-20th century, the penguin appeared to be recovering from this early threat. But changes in ocean currents and temperatures in the Pacific Ocean, apparently driven by global warming, appear to be a grave threat to the species' survival; El Niño southern oscillation events reduce the upwelling of cold, nutrient-laden waters to reduce penguin prey and overall productivity. This penguin is also imperiled by intense commercial fishing and oil pollution.

POPULATION TREND: While there were more than a million Humboldt penguins in the mid-19 th century, a 1998 population and viability analysis indicated that extinction was likely within 100 years. The 1982-83 El Niño reduced the population from approximately 20,000 to around 5,500 individuals as a result of reproductive failure and starvation of adults. By 1996, populations had recovered slightly to 10,000 to 12,000, but the 1997-98 El Niño decimated the population once more, leaving only 3,300 Humboldt penguins in existence.