With its fiery-red body, quick black wings, and long, curved, salmon-colored bill, the 'i'iwi — or scarlet Hawaiian honeycreeper — is one of the most recognizable birds of Hawaii. 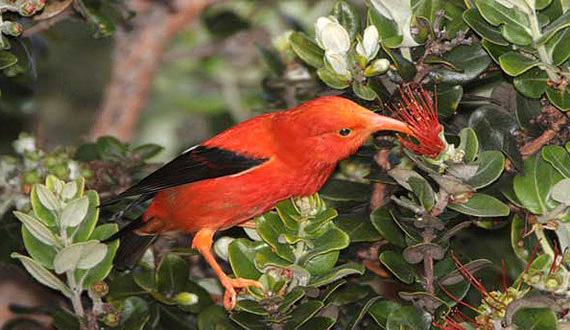 With its fiery-red body, quick black wings, and long, curved, salmon-colored bill, the 'i'iwi — or scarlet Hawaiian honeycreeper — is one of the most recognizable birds of Hawaii. But although it was once widespread across the islands, this beautiful bird is now in danger of immediate or near-term extinction across the whole western portion of its habitat.

The spread of avian malaria and avian pox has limited its range to high-elevation areas where it's too cool for mosquitoes to deliver the diseases, and as climate change pushes colder temperatures farther and farther upslope, the bird will have fewer and fewer high-mountain refuges — and will eventually run out of room altogether. The 'i'iwi is also threatened by agricultural and urban development, as well as nonnative species that also contribute to habitat destruction and facilitate the spread of mosquitoes.

To save the 'i'iwi from extinction, in 2010 the Center petitioned the U.S. Fish and Wildlife Service to list it as threatened under the Endangered Species Act, as well as to designate critical habitat. In 2011 we reached a historic agreement with the Service compelling it to make a listing proposal for the bird by 2012 — as well as move forward on protection decisions for 756 other rare species. The Service finalized Endanered Species protection in 2017.

Unfortunately — and illegally — the agency still hasn't set aside critical habitat for this species. In 2020 we filed a lawsuit to make sure this beautiful bird has the habitat protections it needs to survive.

MEDIA
Press releases
Search our newsroom for the 'i'iwi