The eastern brown pelican weighs only eight pounds, but its body is 4 feet long and its wingspan stretches to 6 or 7 feet. 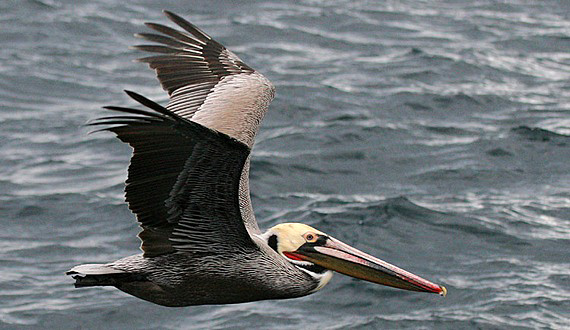 The eastern brown pelican weighs only eight pounds, but its body is four feet long and its wingspan stretches to six or seven feet. In the United States, eastern brown pelicans range from Maryland south to Florida and west to Texas. The brown pelican was nearly driven to extinction by nest failure caused by organochlorine pesticides in the early 1970s, but after the ban of DDT and other harmful pesticides, the pelican began recovering. It was removed from the endangered species list in Florida and along the Atlantic Coast in 1985, and in the rest of its range in November 2009.

But just five months after the brown pelican was delisted throughout its range, the BP Deepwater Horizon oil spill placed the eastern subspecies back in grave danger. The majority of eastern brown pelicans nest in Louisiana, and thousands of pelicans were killed by the spill.