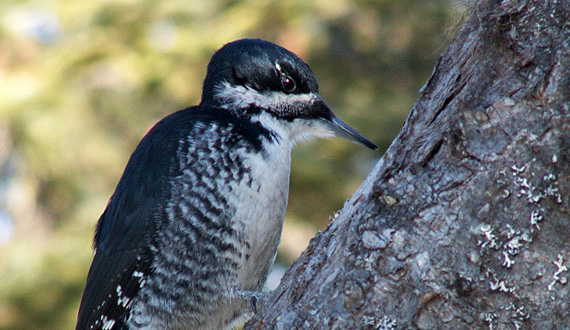 An intensely burned forest of dense, fire-killed trees is perhaps the most maligned, misunderstood and imperiled habitat. Far from being destroyed, a naturally burned forest harbors extraordinarily rich biological diversity, and there's no better flagship species to help us embrace that than the black-backed woodpecker. This bird inhabits dense, mature and old-growth boreal and montane coniferous forests throughout northern North America. But the woodpecker prefers its mature and old-growth trees to be snags — because it loves to eat the wood-boring beetles that flock to large dead and moribund trees, responding to insect outbreaks following fires, windfall, and large-scale drought- or beetle-induced mortality events. Black-backed woodpeckers depend upon an unpredictable and ephemeral environment that may remain suitable for at most seven to 10 years after fire; their populations are clearly regulated by the extent of fires and insect outbreaks — and by the management actions people choose to take in those affected forests. All this is a big focus of a Center report, Nourished by Wildfire: The Ecological Benefits of the Rim Fire and the Threat of Salvage Logging, released in January 2014.

Unfortunately, the U.S. Forest Service and California Department of Forestry and Fire Protection provide absolutely no regulatory protection for burned forests on private and public lands. Not only does burned forest habitat have no legal protection, standard practice on private and public lands is to actively eliminate it. So as soon as fire and insect outbreaks create prime black-backed woodpecker habitat, salvage logging destroys it, while fire suppression — also standard practice — prevents the creation of new black-backed woodpecker habitat and eradicates existing habitat.

To protect this woodpecker and the post-fire ecosystems it depends on throughout California, in 2010 the Center and the John Muir Project petitioned to list the bird under the California Endangered Species Act, earning it "candidate" status in the state, which does offer some protections for the bird. In 2012 we and three other groups filed a petition under the federal Endangered Species Act to protect two small and genetically distinct populations of the black-backed woodpecker, one in Oregon and California and the other in South Dakota.

After a lawsuit launched by the Center and John Muir Project, in 2014 we reached a settlement with the U.S. Fish and Wildlife Service to help push black-backed woodpeckers in California, Oregon and South Dakota closer to protection under the Endangered Species Act. The Service issued a "90-day finding" indicating that listing might be warranted, but in 2017 the Trump administration went against science in ultimately rejecting our petition.

KEY DOCUMENTS
2014 settlement
2014 Center report: Nourished by Wildfire: The Ecological Benefits of the Rim Fire and the Threat of Salvage Logging

MEDIA
Press releases
Search our newsroom for the black-backed woodpecker