GIVE TODAY
Newell's shearwaters can swim underwater, probably down to 10 meters below the surface. 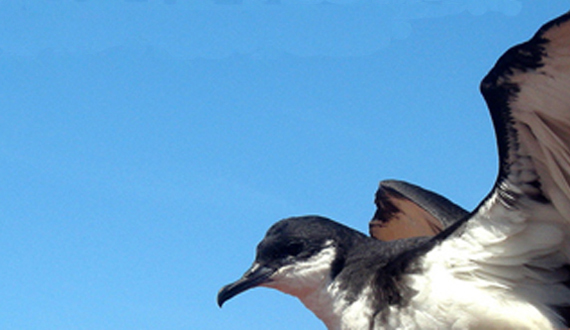 The Newell's shearwater is a threatened seabird that resides in the tropical Pacific Ocean and is known to breed only within the mountainous terrain of the southeastern Hawaiian Islands. Locally known as the 'a'o for the moan-like call it emits when in its burrow, the bird is small shearwater, with a glossy black top contrasted by a striking white underside. Although time on shore represents only a small fraction of this bird's life, the species' breeding grounds have contributed to its own downfall. Serious population declines are attributed to degraded island habitat, depredation by introduced land predators, light pollution, and collisions with power lines. It is estimated that the Newell's shearwater's population has been declining at rates far exceeding 50 percent over the species' last three generations.


The Newell's shearwater is on a collision course with human development. During the fledging season in Kauai, critically imperiled Newell's shearwaters heading to sea are attracted to bright lights in and around the lights of luxury resorts, which are situated on coastal bluffs on the North Shore of Kauai, an important seabird flyway. Trapped in the lights' glare, the confused birds circle repeatedly until they fall to the ground from exhaustion or strike the resort's buildings. Light pollution from resorts is the leading cause of deaths and injuries of imperiled seabirds in Kauai, while bird collisions with power lines are another cause of mortality. The Center is working hard to save this magnificent seabird from both threats.

MEDIA
Press releases
Search our newsroom for the Newell's shearwater