The Dixie Valley toad does not have an advertisement call, but males emit a release call when they come into contact with one another, similar to the weeping of a chick. 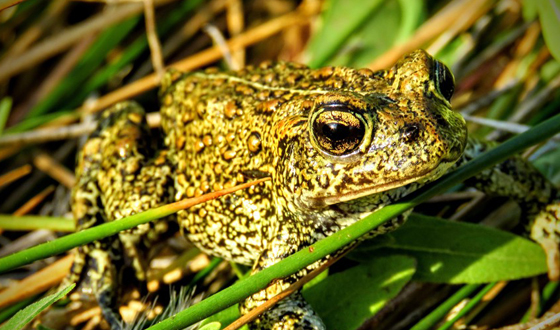 For generations, Nevada’s big-eyed, black-freckled Dixie Valley toad thrived in a small desert oasis, hidden from humans. But by the time scientists described it in 2017, the toad was already imperiled. The very landscape that makes the Dixie Valley ideal for this animal also draws development. We’re fighting to save it from a geothermal-energy plant that would destroy its home.

This species’ habitat in the Dixie Valley Playa lies within the Great Basin, which is mostly very dry. But the toad lives in unique wetlands dotting the western edge of the Dixie Valley Playa, fed by hot springs. Sadly, these hotsprings also make prime real estate for geothermal-energy plants. And a new plant may soon be built right in this toad’s habitat.

This tiny toad is already threatened by invasive species, disease, climate change, groundwater extraction and livestock grazing. An energy plant in its habitat could mean extinction.

The Center has been working to save the toad's habitat from the Dixie Meadows geothermal plant. After we filed a lawsuit with the Fallon Paiute-Shoshone Tribe — for whom the area's sacred springs are sacred — in 2022 we won an injunction halting the project.

We first petitioned the federal government for emergency protection forthe Dixie Valley toad under the Endangered Species Act in 2017. The next year, the U.S. Fish and Wildlife Service determined that this toad may qualify for protection. We won’t stop fighting to save this little toad and its home. Learn more.

• The Dixie Valley toad doesn’t have an “advertisement call,” but males emit a release call when they come into contact with one another. It sounds like a baby bird crying.

• This toad is the first new U.S.-based toad species discovered in 50 years.

• The Dixie Valley toad has tan and black-specked “parotoid glands” — external skin glands on their backs, necks, and shoulders.

• This animal is one of the smallest in the “true toad” family.

• The toad’s range is tiny, too — it lives in only four spring-fed wetlands on about 1,500 acres.