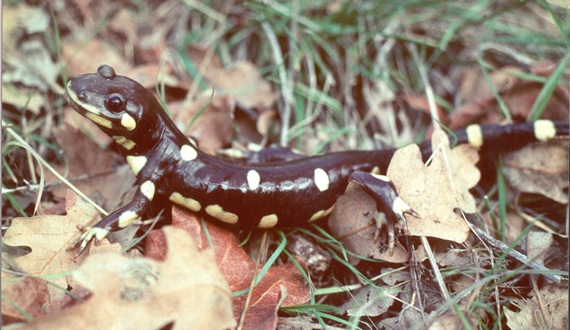 With its wide mouth charmingly outlined in yellow, the California tiger salamander always looks like it's smiling. But this beautiful amphibian is a discriminating species that can only thrive in unique — and now extremely rare — habitats. As California's vernal pools, grasslands and oak woodlands disappear, the tiger salamander has fewer and fewer reasons to grin. The species' plight is particularly extreme in Sonoma County, where development threatens 95 percent of remaining salamander habitat, and the Santa Barbara population — although it was listed as federally endangered in 2000 — is still on the verge of winking out.

The Center has advocated hard to protect the California tiger salamander under both the federal and the California Endangered Species Acts, as well as to force designation of critical habitat. Thanks to our actions, the Sonoma and Santa Barbara populations have been federally listed as endangered, the central California population is considered threatened, central California salamanders have been granted critical habitat, and the Sonoma population is on its way toward habitat protections. The California Fish and Game Commission was ordered to accept the Center's 2004 petition to list the entire species statewide, and in early 2010 finally granted the species state protection.

However, the critical habitat designation for the central California population — made in 2005 under political influence — illegally slashed critical habitat in half, and in the same year, the Sonoma County population's critical habitat was completely eliminated. The Center submitted a notice of intent to sue the Bush administration over these and 53 other wrongfully made Endangered Species Act decisions in 2007, and we sued the next year. Our efforts paid off in 2011, when the U.S. Fish and Wildlife Service proposed to designate 50,855 acres of critical habitat for the Sonoma County salamanders — leaving out some important areas, but making a crucial step toward salamander recovery.

Through our Pesticides Reduction Campaign, we're also challenging the Environmental Protection Agency's registration and authorization-for-use of 46 toxic pesticides in and upstream of habitats for San Francisco Bay Area endangered species, including the California tiger salamander.