Just as nature inspires art, art inspires actions to defend wild places and the wild creatures that live in them. With this in mind, the Center for Biological Diversity's Endangered Species Mural Project works with artists, scientists, and organizers to bring endangered wildlife onto the streets of cities and towns around the country. These murals are imagined as tools to help celebrate local endangered species within communities, and to encourage people to make connections between conservation and community strength. Spearheaded by Portland artist Roger Peet, the mural project promotes an affinity for the natural world and the diverse species that help define it.

Got a wall? Let us know! With additional connections and funding, the Center will continue to work with local artists and communities and expand the project to more cities nationwide.

Read a message from the artist.

This 250-square-foot mural in Del Rio, Texas, depicts the Mexican blindcat, an endangered catfish found in underground aquifers on both sides of the U.S.-Mexico border in south Texas and northern Coahuila. Roger Peet coordinated the mural production with the help of Casa de la Cultura, a community organization that works to make arts and literacy accessible and affordable.

This 2019 mural — replacing another of this species, destroyed by fire — features the white fringeless orchid, a rare and beautiful 2-foot-tall plant with a light-green stem and clusters of white flowers. Like the first orchid mural, it was painted by Roger Peet and Tricia Tripp in Berea, Kentucky. It decorates the town's Spotlight Playhouse, adjoining a community garden that provides food to local low-income residents as well as education and hands-on experience to kids. Additional sponsorship of this Center project was provided by Kentucky Heartwood and Berea Kids Eat.

Our first international mural in Ciudad Juarez, Chihuahua, Mex., is located in the popular Parque Borunda, near the main international crossing. This mural features the endangered Aplomado falcon and the jaguar, two iconic species of the U.S.-Mexico borderlands. The piece is presented by Center for Biological Diversity’s Endangered Species Mural Project, Rubin Center for the Visual Arts at The University of Texas at El Paso (UTEP), and the Visual Art Program at Universidad Autónoma de Ciudad Juárez.

Located in the town of Seward — Alaska's mural capital — this 105-foot-long mural depicts two species from Alaskan waters: a threatened seabird called the spectacled eider as well as the critically endangered North Pacific right whale. The piece was painted by artists Roger Peet and Tricia Tripp.

This 256-foot-long mural in Arcata, Calif., by Lucas Thornton, celebrates the endangered marbled murrelet, an ancient seabird from the Pacific Northwest that flies inland 50 miles to nest among deep moss in old-growth forest canopy. .

Mural of the Austin blind salamander, a small amphibian whose habitat is found entirely within the Austin city limits and is threatened by pollution and development. The mural was painted by project coordinator Roger Peet with help from students at Austin Discovery School in Austin, Tex.

This 1,000-square-foot mural on the Little Miami Scenic Trail at Bass Island Park features the endangered Indiana bat. The mural was painted by Roger Peet and ArtWorks Cincinnati youth apprentices and supported by Great Parks of Hamilton County.

The Taylor's checkerspot is an endangered butterfly once found widely in prairies in Oregon and Washington, but now restricted to a few dwindling populations and at an extreme risk of going extinct. This mural in Cottage Grove, Ore., was done by Roger Peet.

One of a series of grizzly bear murals in Oakland, Calif., by Roger Peet and Fernando “Rush” Santos.

This mural of the beautiful white fringeless orchid was painted in 2016 in Berea, Kentucky, by Roger Peet and Tricia Tripp as the ninth installment of the Center's Endangered Species Mural Project. Sadly it was destroyed by fire — but we made sure a new one was painted.

Message From the Artist

“Everywhere on Earth is unique, with qualities that distinguish it from other places both near and far. One of those qualities is biodiversity — the plants and animals that call a place home and may not be found anywhere else. Those species embody an area's natural history and contribute to what makes it irreplaceable — and they also have something to say about the future, as many are in danger of going extinct. When we lose species, the places we inhabit and the lives we live become poorer and shallower  as a result. To help bring these species into the light, we decided to paint them on the walls.

“The goal of this project is to foster connections between people and the other forms of life that surround them. Whether that's a fish in a river, a butterfly flitting from plant to plant, or a caribou chewing lichen from a tree, we're bringing together artists and communities to create big, bold images that will become part of the neighborhoods where they're created, making it a little easier for people to care about the species struggling to survive in their midst.”

Roger Peet is a Portland-based artist who is coordinating this project in association with the Center for Biological Diversity.

INTERACTIVE SLIDESHOW AND MAP OF MURALS AND LOCATIONS 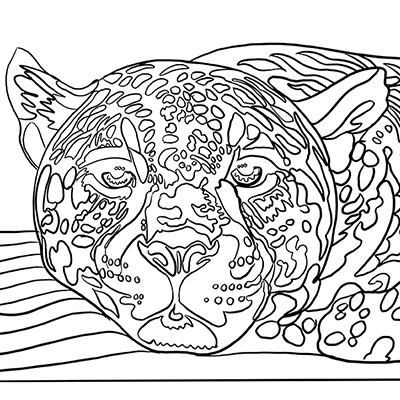 Check out our coloring pages.

"Extinct For A Century, Grizzly Bears Make A Comeback On MacArthur Blvd."

"A Portland Artist Painted a Bold Mural at Standing Rock"

Monarch Butterfly Endangered Species Mural to Be Unveiled in Minneapolis