GIVE TODAY
This nonpoisonous snake is found in and near the cool, clear headwater streams of the Southwest. 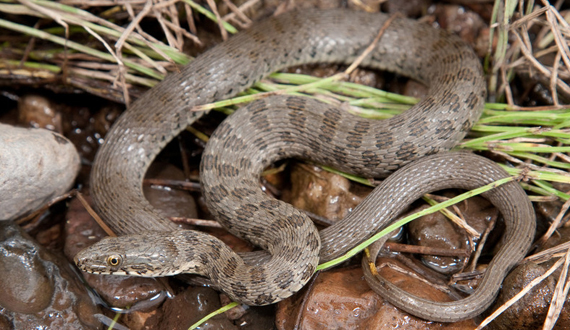 The narrow-headed garter snake is a nonpoisonous snake found in and near the cool, clear headwater streams of the U.S. Southwest. With its stripeless, grayish-colored body, it has been called “drab” in color — but its irregular dark spots, small body and long, triangular head make it unique. Like water snakes, narrow-headed garter snakes are highly aquatic and eat fish. In strong river currents their namesake elongated heads reduce drag from the water as they strike out on prey.

These snakes' appearance and habits are unlike those of any other garter snake you might encounter. But the odds of encountering one aren't good: Unlike garter snakes that frequent backyard gardens across the country, these garters are very rare. In fact scientists haven't been find any in most places they once thrived. Remaining populations are small and isolated.

The main causes of their population declines are habitat alteration and the introduction of nonnative predators — including fish, crayfish and bullfrogs. Unfortunately these are the same threats leading to the decline of nearly all aquatic animals of the Southwest.

After the Center and two biologists submitted a status report to the U.S. Fish and Wildlife Service on the need to safeguard this species, in 2014 narrow-headed garter snakes were protected under the Endangered Species Act (along with another rare aquatic Southwest reptile, the northern Mexican garter snake). Since then we've sued to make sure they get the protected habitat they need, and we continue to look out for the wellbeing of these little snakes, which are also a part of our Endangered Species Mural Project.