GIVE TODAY
Hawaii has approximately 10,000 endemic species --- animals and plants that exist nowhere else in the world. 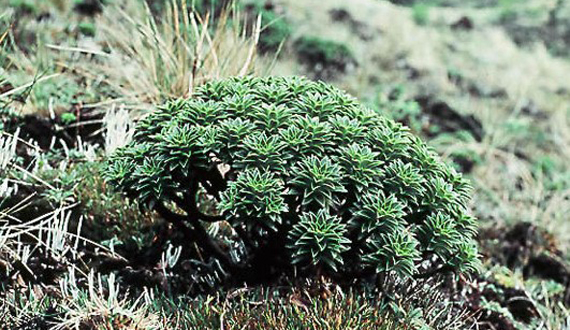 The summit of Waialeale on the Hawaiian island of Kauai is among the wettest places on the planet. Having evolved in isolation for millennia, this ecosystem is home to several unique species, including the tender, flowering shrubs called na'ena'e. When Captain James Cook stumbled upon the island chain in the 18th century, everything changed. That's because he brought European pigs with him — which became feral and have since jeopardized many native species. Today, few na'ena'e remain.

So low are its numbers, and so limited its distribution, that even a landslide or other naturally occurring event could mean lights out for the na'ena'e. Several prominent scientists, artists, and conservationists joined with the Center in 2004 to make sure the na'ena'e is cared for before it's too late. Together, we submitted a citizen petition to protect the na'ena'e, as well as 224 similarly imperiled plants and animals.

These Hawaiian plants have been awaiting protection for several decades — ever since the Smithsonian Institution first sought to fortify the species using the Endangered Species Act. Sadly, bureaucratic sloth and neglect has been the usual governmental response to Hawaiian plant declines. The 86 Hawaiian plants on the current endangered species candidate list were first put there, on average, nearly 20 years ago.

MEDIA
Press releases
Search our newsroom for the na'ena'e