GIVE TODAY
The Cook's lomatium is a member of the parsley family, a family that also contains the deadly poison hemlock. 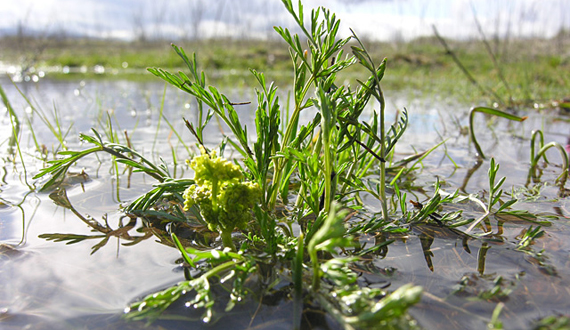 Adapted to live in ephemeral wetlands, the usually inconspicuous Cook's lomatium comes into its own for short time in the early spring, after winter rains bless its desert-like home with ample water and the plant bursts into bloom — flowering and setting seed all before the hot, dry summer sets in. But since the 1980s, the species has lost more than 50 percent of its range to development, and none of its remaining habitat has escaped the invasion of weedy competitors. With fewer and fewer vernal pool wetlands to call its own, the Cook's lomatium is increasingly denied even the modest growing space it needs to survive.

In 2002, 10 years after the Center and allies sued the U.S. Fish and Wildlife Service for failing to list about 500 imperiled species — including the Cook's lomatium — the Service declared both the Cook's lomatium and the large-flowered woolly meadowfoam endangered under the Endangered Species Act. But at the time of listing, the Service failed to designate any critical habitat for either plant, claiming that “funding restraints” made it impossible. Finally, as a result of a Center lawsuit, in 2010 the agency granted the plant 6,289 acres of critical habitat.

While the largest Cook's lomatium populations are located within Jackson County's protected Agate Desert Preserve, alteration of land adjacent to the preserve disrupts its hydrologic processes and degrades the habitat it provides; in addition, lack of protective fencing fails to keep out off-road vehicles and earth-moving equipment. Vernal pool habitat, formerly widespread south of the Rogue River, has now been almost completely eliminated — and none of what's left is undisturbed.

MEDIA
Press releases
Search our newsroom for the Cook's lomatium