GIVE TODAY
All plants in the Astragalus genus are potentially toxic to animals if ingested, causing a permanent neurological condition called locoism. 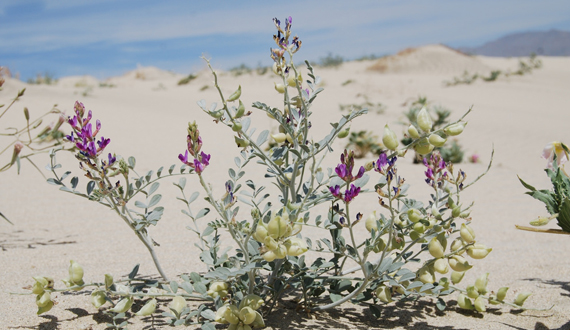 Unaccustomed to cosmopolitan life, the Coachella Valley milk vetch finds itself and its sandy home amid one of the fastest-growing metropolitan areas in the United States. Living at the edge of Southern California's Colorado Desert, this foot-tall flowering herb is dependent on a perpetually changing, windswept sea of sand to keep its dune habitat healthy. Yet it has no use for the damaging developments that accompany the local population boom, which now blanket this once-thriving landscape.

Recognizing that the Coachella Valley milk vetch is found in fewer than 25 locations in California's burgeoning Riverside County, the Center filed a lawsuit that led the U.S. Fish and Wildlife Service to grant Endangered Species Act protection to this imperiled desert plant. But despite unbridled regional growth and the fact that 80 percent of Coachella Valley milk vetch locations are on unprotected, private lands, the Service initially determined that an accompanying critical habitat designation wasn't needed for the species' survival. We filed a lawsuit that made the agency change its tune and propose 3,500 acres as protected milk vetch habitat.

Unfortunately, after reviewing public comments regarding its proposal, the Bush-era Fish and Wildlife Service allowed politics to taint its final decision and wrongfully allocated no critical habitat for the endangered milk vetch — so we filed suit in January 2009.  In 2013, the Service finally  finalized protection of 9,603 acres of critical habitat for the milk vetch. The Center has also initiated several legal challenges against pending developments that threaten to annihilate the milk vetch and its habitat.