GIVE TODAY
This plant's flower stalk may contain as many as 40 white flowers. 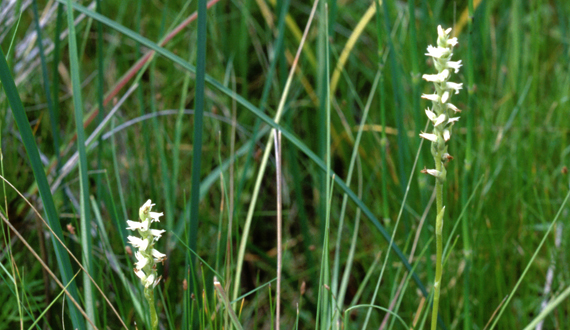 With their spirals of small, white flowers and long, slender stalks, Canelo Hills ladies' tresses really do look like locks of a woman's wavy hair. But the plant's beauty hasn't saved it from the water diversions, pumping, and sand and gravel mining that decimate its unique cienega habitat. Not to mention the myriad other threats — much worse than split ends — that threaten this terrestrial orchid.

The Center has been working to protect Canelo Hills ladies' tresses since 1993, when we first petitioned the U.S. Fish and Wildlife Service to list the species under the Endangered Species Act. Because the agency failed to do so, we filed suit in 1996, and the species was listed as endangered the following year. We've also challenged grazing allotments that threaten numerous obligate wetland species, including Canelo Hills ladies' tresses. We continue to help the plant through our San Pedro River campaign, which seeks to reform water use in the river basin and ensure that water remains in the river's tributaries.

Massive losses in wetlands and functioning river systems in southern Arizona have restricted Canelo Hills ladies tresses to just five known locations on less than 200 acres. This means that a single environmental catastrophe, such as a severe storm or drought, could cause the plant's annihilation in the blink of an eye. But extinction can be prevented if ongoing threats to its habitat are eliminated, allowing the species to grow and thrive.