GIVE TODAY
The flower stalks and heads of the Ash Meadows gumplant are sticky to the touch. 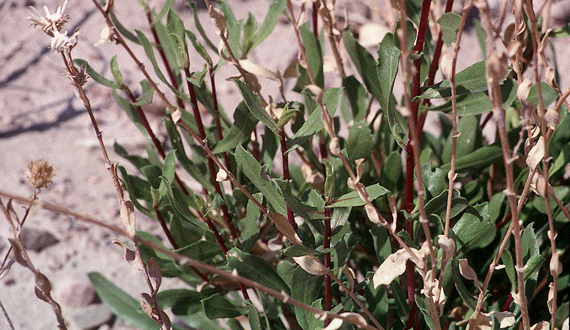 The Ash Meadows gumplant thrives on salty soils — especially the moist, salt-encrusted, alkali soils of Ash Meadows in the Amargosa Valley. But road construction, off-road vehicle use, and livestock grazing rapaciously consume gumplant habitat. Groundwater pumping in particular is taking its toll on the species, draining wide swaths of habitat, lowering the meadows' water table, and drying out spring-water sources the plant needs to survive.

With more the 30 free-flowing springs, Ash Meadows is an oasis in the desert, and over the past century farming has been tried there numerous times. The meadows' salty, clay soils deterred many early homesteaders from their agrarian aspirations, and the area remained largely intact until 1967, when an agricultural corporation and a peat-mining company purchased nearly 20 square miles in the northern and eastern portions of the meadows. In an effort to convert the land to large-scale agricultural use, wetlands were drained, large areas were ploughed under, and pumps were installed at many of the springs. A tremendous amount of Ash Meadows gumplant habitat was destroyed.

In 2000, the Center, Public Employees for Environmental Responsibility, and the Sierra Club filed suit against the Bureau of Land Management for the agency's failure to rein in overgrazing on 10.2 million acres of southern California desert. In 2001, we won a settlement with the agency whereby millions of acres were protected and thousands of miles of roads were closed in the California Desert Conservation Area. The settlement also required the agency to keep cattle and burros fenced off from sensitive riparian habitat — including the salt-grass meadows and marshes in which the Ash Meadows gumplant is typically found. And the Bureau installed protective fending adjacent to access roads to shield the Ash Meadows gumplant from habitat destruction in California.