GIVE TODAY
The small size of island foxes is an adaptation to the limited resources available in their island environments. 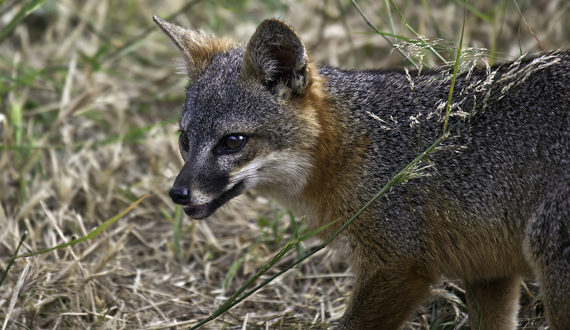 
DESCRIPTION: Roughly the size of a housecat, the island fox has a head-and-body length of about 18 to 20 inches, a tail anywhere from four to 11 inches long, and a height of 12 or 13 inches. Island foxes weigh only about four or five pounds, with the males somewhat larger than the females. The fox has gray coloring on its back, rust coloring on its sides, and white underneath. Its face has a distinctive black, white, and rufous-colored pattern, and its tail has a black dorsal stripe. Pups are woolly before their first molt and have a darker coat than adult foxes.

MIGRATION: Restricted to their islands, these foxes do not migrate. Home-range sizes vary by habitat type, season, and sex of the animal; recorded home-range estimates range from 23.5 hectares in mixed habitat to 76.5 hectares in canyons on San Clemente Island.

BREEDING: Island foxes typically form monogamous breeding pairs and are seen together beginning in January and through the breeding season, which lasts from late February to early March. One to five kits are born in a den in the spring, after a gestation period of 50 to 63 days. They emerge from the den in the summer.

LIFE CYCLE: Island foxes reach sexual maturity at 10 months, and females usually breed within the first year. These foxes can live for up to 10 years in the wild, but four to six years is more typical. Pup and adult survival has been shown to vary from island to island.

THREATS: The primary threat to the island fox is predation by invasive golden eagles. The species is also very vulnerable to canine distemper transmitted by domestic dogs, habitat fragmentation due to development, and habitat loss to introduced livestock and game species.

POPULATION TREND: The island fox declined catastrophically from the mid-1990s to the end of the century, but due to captive breeding, relocation of golden eagles, and reintroduction of bald eagles (to prevent the goldens from recolonizing), the populations of its subspecies have since grown. The San Miguel island population went from 450 in 1994 to 15 in 1999, growing to 40 wild and 26 captive foxes by 2005; Santa Cruz Island foxes declined from 1,465 in 1994 to 60 in 2001, but had become 150 wild and 62 captive foxes by 2005; the Santa Rosa Island population declined from 1,780 in 1994 to 14 in 1999, with numbers rising to 32 wild and 34 captive foxes by 2005. Though the population of the Santa Catalina Island fox has been studied only intermittently, sightings had dramatically declined by the summer of 1999; the subspecies' population has increased since its 2004 listing. By 2016, populations had recovered to the point that the Service proposed to remove San Miguel island fox, Santa Rosa island fox and Santa Cruz island fox from the endangered list, and to downlist the Santa Catalina island fox from "endangered" to "threatened."