GIVE TODAY
The island marble is white and greenish in color, with a marbled texture under the hind wing and a wingspan of approximately 45 millimeters. 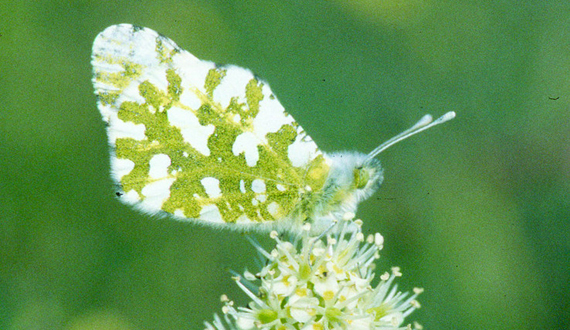 A beautiful white and green butterfly with a marbled hind wing, the island marble once fluttered about in the open grasslands and Garry oak woodlands of Washington's San Juan Islands and Canada's Gabriola and Vancouver Islands. Last seen in 1908, it was believed extinct until a small population was found 90 years later in the San Juan Island National Historical Park. Scientists believe this is the only viable population of island marble butterflies in the world — one catastrophic event could wipe out the whole population.

The Service finally acknowledged our petition was warranted in February 2004, beginning a review of the butterfly's status. But in November of that year, the agency decided that the butterfly didn't protection, claiming that enough populations of the island marble existed to justify its listing denial — even though scientists argue that only one of these populations is viable.

Finally, in 2020, the Service granted this little butterfly the Endangered Species Act protection it needs, plus 812 acres of federally protected habitat.