GIVE TODAY
The Quino checkerspot tends to avoid flying over objects taller than six to eight feet. 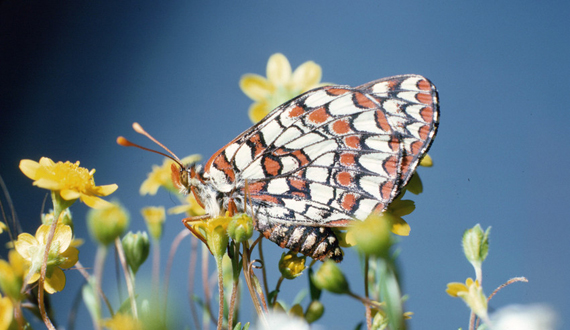 DESCRIPTION: The tiny Quino checkerspot has short, rounded wings with a wingspan of 1.5 inches. The top side of the wings is a complex checkered pattern with vibrant colors of orange, black, and cream, while the bottom side is dominated by orange and cream colors.

HABITAT: The Quino checkerspot may occupy a variety of habitat types — including grasslands, coastal sage scrub, chamise chaparral, red shank chaparral, juniper woodland, and semi-desert scrub — that support native species of plantain, the butterlfly's primary larval host plant. This checkerspot can also can be found at the lower edge of the chaparral, in desert canyons, and in canyon washes.

RANGE: Historically, this butterfly was distributed throughout the coastal slopes of southern California, from Los Angeles, Orange, Riverside, San Diego, and San Bernardino counties southward to El Rosario in northern Baja California, Mexico. Its historic distribution included the westernmost slopes of the Santa Monica Mountains, the Los Angeles plain, and the Transverse Ranges to the edge of the upper Anza-Borrego desert.

MIGRATION: The Quino checkerspot does not migrate.

BREEDING: Mating and peak adult activity generally occur in March and April, when the female lays her eggs at the base of the host plant.

LIFE CYCLE: When host plants become desiccated, larvae seek shelter among leaf litter until the following winter. Fall and winter rains spark the germination of the host plant, which in turn causes the larvae to come out of dormancy. These butterflies may spend several years in a dormant period, briefly breaking and reentering dormancy over and over before reaching maturity, depending largely on rain patterns. Quino checkerspot butterfly larvae may undergo as many as seven molts prior to pupation. There is typically one generation of adults per year, with a flight period from late February through May.

FEEDING: Larvae feed upon the leaves of plantain, the host plant. Adults feed on plant nectar.

POPULATION TREND: Formerly one of the most common butterflies in southern California, the Quino checkerspot now inhabits only eight areas in southwestern Riverside and southern San Diego counties and four in Baja. Of these, all but three populations contained fewer than five individual butterflies in 2000. Currently, the butterfly is known from high, inland elevations such as Dictionary Hill, Otay Lakes, and San Miguel Mountain in San Diego County, as well as the Gavilan Hills in Riverside County. It has not been seen in Orange County, Los Angeles County, or coastal San Diego County for nearly 30 years and is extirpated from San Bernardino County as well. Wildfires in Southern California in 2003 burned 19 percent of the Quino checkerspot's critical habitat and eliminated 27 percent of its known occurrences.