GIVE TODAY
Amphipods can be either terrestrial or aquatic, but all amphipod species require moist environments to live. 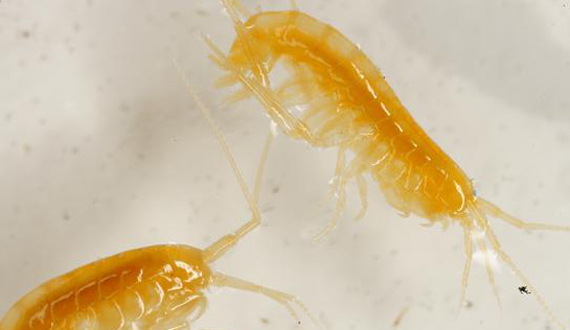 Thought to lurk underground in the dark, honeycomb-like recesses between two Edwards Aquifer springs in central Texas, the elusive Peck's cave amphipod depends on steady spring flows and clean water for survival. Before the aquifer was drilled full of wells, the flow from the springs equaled the water that recharged it every year, and the amphipod likely thrived. But as humans pump out more and more water to for their growing populations in the area, this subterranean crustacean faces a permanent lights-out.

The Peck's cave amphipod, along with its endangered fellows the Comal Springs dryopid and riffle beetles, once survived a drought that stopped the flow of Comal Springs from June 13 through November 3, 1956. The fact that these invertebrates weren't extirpated at that time says a lot for their tenacity, but all three species were left devastated and still have very small populations. Today, groundwater pumping at Edwards Aquifer is greatly reducing the water flow of the springs in which these species are found, and that could result in years — not months — of significant drying. To make the situation worse, pollution from myriad other human activities contaminates what water remains.

The Peck's cave amphipod was officially declared endangered in 1997, but along with the Comal Springs riffle beetle and Comal Springs dryopid beetle was denied critical habitat. To protect the invertebrates' home, the Center sued the U.S. Fish and Wildlife Service in 2003, and finally, four years later, critical habitat was designated. But this designation covered a ridiculously small area — not nearly enough to ensure the invertebrates' recovery. In early 2009, we filed suit with allies to gain adequate critical habitat for these three species and 14 others; in late 2012, the Obama administration proposed to expand critical habitat for the cave amphipod, riffle beetle, dryopid beetle, and nine other Texas invertebrates. The next year, it finalized protection for 38 surface acres and 138 subsurface acres specifically for the amphipod.