GIVE TODAY
A dragonfly's four wings can move independently of one another and beat up to 35 times a second. 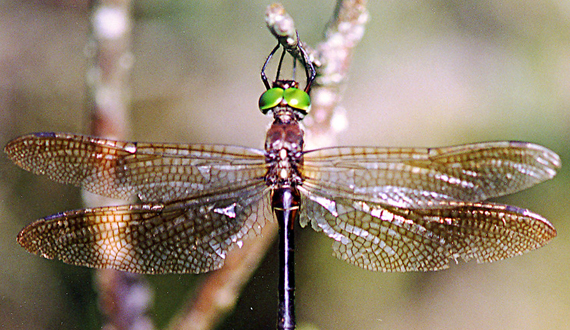 The first known dragonfly fossil had a wingspan of 29 inches. The Hine's emerald dragonfly, found in scattered locations throughout the Great Lakes region and Missouri, isn't anywhere near that size, but it's every bit as remarkable. Renowned for its aerobatic virtuosity and electrifying, enormous green eyes, the Hine's emerald dragonfly hovers on the brink of extinction and is one of the most endangered dragonflies in North America today.

Following years of unnecessary delays, the U.S. Fish and Wildlife Service listed the Hine's emerald dragonfly as an endangered species in 1995 — making it the only dragonfly on the entire endangered species list. The Service chose not to protect the dragonfly's habitat, claiming it lacked necessary scientific knowledge about the species.
Failure to provide critical habitat for the Hine's emerald dragonfly served as a clear example of agency inaction, but was no surprise to the Center. The Service has a lamentable track record in the Great Lakes region, where it has not voluntarily protected habitat for any species in more than a quarter-century. Seventy species listed as threatened or endangered live near the Great Lakes, but less than a handful have designated critical habitat.

In 2004 the Center, leading a coalition of regional environmental groups, filed a lawsuit to stand up for the Hine's emerald dragonfly. We won a court order forcing the Service, at long last, to designate critical habitat. Still dragging its feet, the agency eventually proposed the habitat designation nearly two years later, but then slashed the total area by more than half when it finalized the designation in 2007. The next year, we and our allies sued the Service over its decision to exclude national forest lands in Michigan and Missouri from the dragonfly's critical habitat — and in 2010, our efforts paid off when the agency added those lands, doubling the protected area.