GIVE TODAY
Picture-wings are among the few insects to defend special mating areas called leks where males dance, wrestle, buzz, sing, or butt heads with each other. 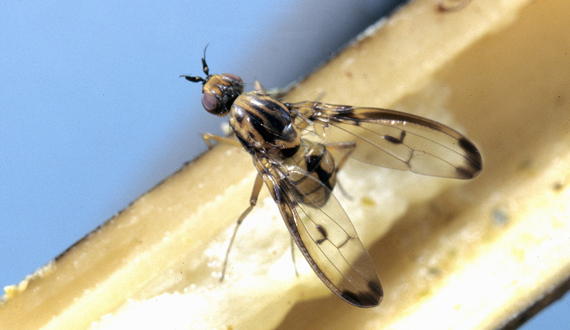 Few Hawaiian species are as amazing as the 111 species of picture-wing flies that have evolved from a single female that migrated from the mainland some 5 million years ago. Hawaiian picture-wings represent one of the most remarkable cases of specific adaptation to local conditions that have been found anywhere; study of these flies has contributed greatly to our understanding of biology and evolution. Small insects in the Drosophilidae family, picture-wings are often called the “birds of paradise” of the insect world for their colorful wing patterns and intricate mating rituals.

Scientists sounded warning bells in 1995 that a dozen species of Hawaiian picture-wings were on the precipice of extinction. When the U.S. Fish and Wildlife Service failed to take action to protect them, the Center and the Conservation Council for Hawaii filed a lawsuit resulting in Endangered Species Act protections for the dozen most imperiled picture-wings. The Service designated 11 species of Hawaiian picture-wing flies (Drosophila aglaia, D. differens, D. hemipeza, D. heteroneura, D. montgomeryi, D. musaphilia, D. neoclavisetae, D. obatai, D. ochrobasis, D. substenoptera, and D. tarphytrichia) as endangered, and one (D. mulli) as threatened. In 2006, it proposed critical habitat for 11 of the 12 flies — a total of just 18 acres.

The agency was charged with finalizing critical habitat for these picture-wings by April 2007, but the 18-acre designation — for 11 species — was clearly inadequate. It was made by disgraced former Fish and Wildlife Service employee Julie MacDonald, many of whose decisions flew in the face of both science and law and subsequently had to be reversed. The Center renegotiated the picture-wing habitat settlement with the Service to extend the deadline in anticipation of a much larger designation, and in December 2008, the Service issued a final critical habitat designation of almost 9,000 acres.