GIVE TODAY
The Comal Springs dryopid beetle was first discovered in 1987 and officially described in 1992. 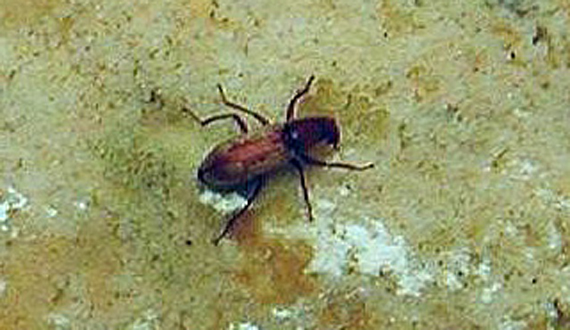 Though the Comal Springs dryopid beetle is aquatic, it doesn't swim, and while it has eyes, it can't see. This small brown beetle lives in the subterranean darkness of the spring outlets and air-filled cavities associated with just two springs in central Texas, and it relies on a steady, natural spring flow for all aspects of its life history. That means if humans keep pumping vast amounts of water from the aquifer that feeds the springs, this tiny underground bug with its apparent evolutionary contradictions could be left high and dry.

Along with its endangered fellows the Comal Springs riffle beetle and Peck's cave amphipod, the dryopid beetle once survived a drought that stopped the flow of Comal Springs from June 13 through November 3, 1956. The fact that these invertebrates weren't extirpated right then speaks for their tenacity, but all three species were left devastated and still have very small populations. Today, groundwater pumping at Edwards Aquifer is greatly reducing the water flow of the springs in which these species are found, and that could result in years — not months — of significant drying. Pollution from myriad other human activities contaminates what water remains.

The Comal Springs dryopid beetle was declared endangered in 1997, but along with the riffle beetle and cave amphipod, it was denied critical habitat. To protect the invertebrates' home, the Center sued the U.S. Fish and Wildlife Service in 2003, and four years later, critical habitat was designated — but not nearly enough to ensure the invertebrates' recovery. In early 2009, we filed suit with allies to gain adequate critical habitat for these three species and 14 others; in late 2012, the Obama administration proposed to increase the three species' critical habitat. The next year, it finalized protection for 139 acres of subsurface habitat specifically for the beetle.