GIVE TODAY
The male unarmored threespine stickleback is a dedicated parent, making a nest and protecting eggs and fry all on his own. 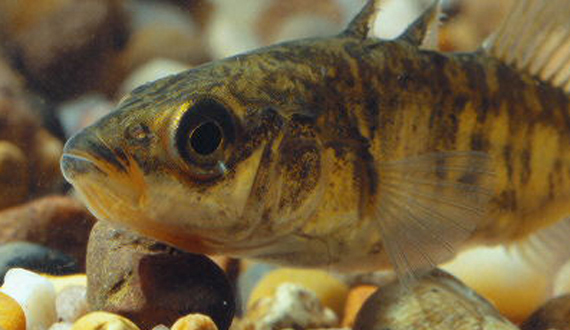 
DESCRIPTION: Threespine sticklebacks average about two inches in length, with three spines in front of the dorsal fin and no bony plates on their sides. At spawning time males develop a red throat and belly, and females turn light red or pink in the same places.

HABITAT: The species needs clear, flowing, well-oxygenated water with pools and eddies and areas of dense vegetation or debris.

RANGE: The species was historically described as abundant in the entire Los Angeles basin watershed (1917), but by 1985 was limited mostly to a small portion of the upper Santa Clara River drainage in northwestern Los Angeles County and a small area in the San Antonio Creek drainage in Santa Barbara County.

MIGRATION: The species is nonmigratory.

BREEDING: The male threespine stickleback establishes a territory that he vigorously protects, builds a nest in the sand, and, after cementing the nest materials together with mucus threads spun from his kidneys, burrows through the nest to make an exit and entrance. When the nest is ready, he searches for a female carrying eggs and swims near her in a zigzag, dancing motion. If the female is attracted, she follows him to his nest, where she deposits her eggs. The male immediately fertilizes the eggs and drives the female away. Over the course of the breeding season, he may entice other females into his nest as well. Males protect both eggs and fry from predators. Incubation time averages six to eight days.

LIFE CYCLE: Most of these fish live for about a year. They do not usually survive to a second spawning season.

FEEDING: Sticklebacks eat mainly benthic insects but feed on a variety of food including algae, snails, and small crustaceans and worms. Males sometimes eat stickleback eggs. Because they are visual feeders, they require relatively clear water in order to see their food source.

THREATS: Sticklebacks have been, and are being, hurt by urban development, pollution, mining, predation by nonnative species, water quality degradation, and channelization of streams.

POPULATION TREND: Monitoring began in the Angeles National Forest in 2001, where the population appears to be maintaining a stable distribution within the forest. Substantial impacts to the species' habitat are thought to have occurred in 2003 and 2004 as a result of numerous development projects in the Santa Clarita Valley.