GIVE TODAY
The Topeka shiner is named after the town near where it was first discovered in 1884. 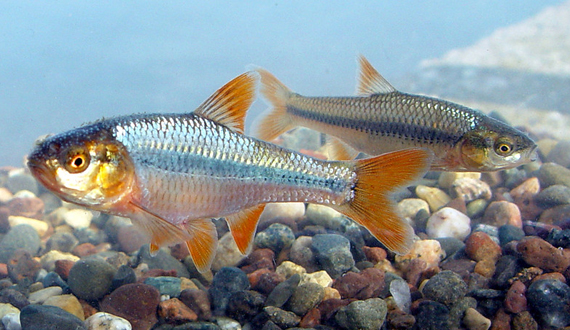 Stream channelization, dam construction, and impoundments change the water flow, temperature, and quality to which the Topeka shiner is specifically adapted. Dams also prevent shiners from migrating up- and downstream to find better habitat during times of low stream flow, and they encourage these fish to linger in deep areas rife with nonnative predators. Many other threats imperil the Topeka shiner, including gravel-removal operations, water pollution from livestock, and land-use changes resulting from urbanization. Thanks to human impacts, this once-abundant minnow now swims in less than 10 percent of its old geographic range, which doesn't say much for our country's stream quality — and doesn't bode well for our own future or the shiner's.

The Topeka shiner's plight was recognized in 1998, when it was listed as endangered under the Endangered Species Act. But almost 10 years later, it still has no final recovery plan. Thanks to the Center and its allies, who sued the U.S. Fish and Wildlife Service in 2001 to force critical habitat designation, the shiner does have some federally protected streams to call its own. But these aren't nearly enough.

The Center's plans to fight this illegal critical habitat designation, along with political interference with the protections of 54 other imperiled species, are expressed in our notice of intent to sue the Department of the Interior, submitted in August 2007 and initiating the largest substantive legal action in Endangered Species Act history. We're also helping the Topeka shiner and many other fish through our Rivers Campaign.

MEDIA
Press releases
Search our newsroom for the Topeka shiner