GIVE TODAY
Roanoke logperch use their conical snouts to turn over pieces of gravel and feed on exposed invertebrates. 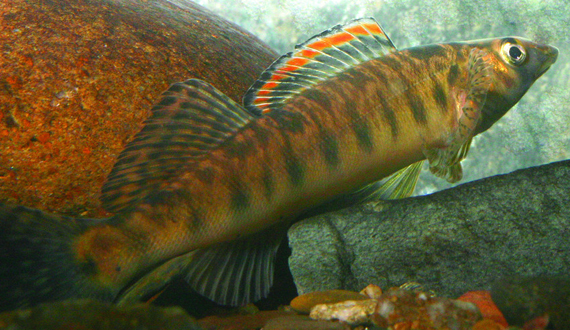 Roanoke logperch are small, freshwater fish that can grow up to 5.5 inches in length. They are elongate and cylindrical in shape with a conical snout, and have prominent bar markings on their sides. They hunt for prey by flipping over small pebbles at the bottom of rivers and streams with their snouts to find tiny invertebrates to eat. Roanoke logperch are part of a much larger family of fish, the Percidae, which occur primarily in the eastern United States and Canada and includes the darters and the perches. These fish species require clear, unpolluted water in unaltered river systems to survive. Unfortunately, massive alterations of river systems throughout the eastern half of North America has resulted in many Percidae fish species becoming endangered. Twenty darter and logperch species besides the Roanoke logperch are now federally endangered or threatened.

The Roanoke logperch is currently found in five isolated river systems, and its distribution is fragmented by the presence of several large dams. Logperch tends to occupy medium to large warm-water streams and rivers of moderate gradient with relatively silt-free substrata that are free of pollution and sedimentation. The Roanoke logperch is one of two endangered species that was impacted by the 2014 Dan River coal ash spill, when more than 39,000 tons of coal ash contaminated approximately 70 miles of the Dan River. The Center is working to protect the Roanoke logperch by securing critical habitat for this highly endangered species, and by working to improve water quality in its remaining habitats.

MEDIA
Press releases
Search our newsroom for the Roanoke logperch