GIVE TODAY
Pacific lampreys are an important subsistence, ceremonial, and medicinal food for some native American tribes in the Pacific Northwest 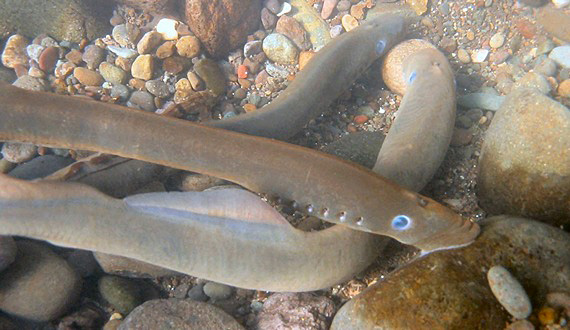 Lampreys are delightfully bizarre fish, vastly underappreciated for the role they play as a food source in estuarine, stream, and river ecosystems. Ancient, jawless fish, lampreys superficially resemble eels but are not related to them. They have an anadromous life cycle (migrating to freshwater for spawning), similar to salmon and steelhead trout. Large concentrations of adult and larval lampreys were once an important and dependable high-fat food source for many birds, fish, and mammals along the Pacific Coast and acted as a buffer to reduce predation on migrating adult salmon. Like salmon, lampreys play a key ecological role transporting nutrients such as nitrogen to freshwater ecosystems.

Alarmed by severe declines of Pacific lamprey in many West Coast rivers, the Center joined a coalition of conservation organizations in petitioning for Endangered Species Act protection for the Pacific lamprey. We filed suit against the U.S. Fish and Wildlife Service when the agency failed to respond to the listing petition. The Service eventually made a determination that the Pacific lamprey does not warrant listing.

The Act — which will hopefully soon protect this fish — also needs protection.

MEDIA
Press releases
Search our newsroom for the Pacific lamprey