GIVE TODAY
This small minnow only occurs in the Arkansas River and its tributaries. 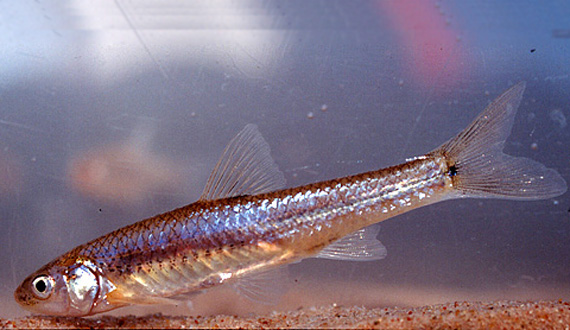 DESCRIPTION: The Arkansas River shiner is a robust, diminutive shiner with a small, dorsally flattened head, a rounded snout, and a small, subterminal mouth. Dorsal coloration tends to be light tan, while the sides of the fish are silvery. Adults reach a maximum length of about two inches.

HABITAT: This fish prefers the main channels of wide, shallow, sandy-bottomed rivers and larger streams of the Arkansas River basin. Like most fishes occurring in the highly variable environments of plains streams, this shiner uses a broad range of microhabitat features, but adults are uncommon in quiet pools or back waters and almost never occur in tributaries with deep water and bottoms of mud or stone.

RANGE: The Arkansas River shiner is currently found in the Canadian River in New Mexico, Oklahoma, and Texas, and in the Cimarron River in Kansas and Oklahoma. A nonnative, introduced population — not listed under the Endangered Species Act — occurs in the Pecos River in New Mexico. Historically, this shiner was widespread and abundant from the Texas- New Mexico state line to central San Miguel County in New Mexico. The fish could also be found in Ute and Revuelto creeks and the Conchas River.

MIGRATION: There is strong evidence supporting a pattern of upstream movement by Arkansas River shiners over the course of a year; this is speculated to be a spawning migration, but may be a general tendency to move upstream in search of better environmental conditions.

BREEDING: Arkansas River shiners are in their peak reproductive condition in May, June, and July, and may spawn several times during this period. The average female lays between 120 and 274 nonadhesive eggs, which drift with the river's current and hatch within 24 to 48 hours of being laid. Larvae can swim within three or four days, at which point they begin to seek out quiet water where food is more abundant. Studies have shown that this fish will not spawn unless conditions are favorable for the survival of the larvae.

LIFE CYCLE: Arkansas River shiners can be divided into at least three age classes: juveniles, first-time spawners, and post-spawning fish. The maximum lifespan of this shiner is not known, but it is likely less than three years in the wild.

FEEDING: This fish has been found to be a generalist feeder, ingesting detritus, aquatic invertebrates, and sand and silt. No particular invertebrate dominates the diet, with the exception of larval flies, which are consumed more frequently than other insects during the winter season.

POPULATION TREND: Formerly an inhabitant of over 1,700 miles of habitat in the Arkansas River basin's larger rivers, the Arkansas River shiner is now almost entirely restricted to about 508 miles of the Canadian River in Oklahoma, Texas, and New Mexico. An extremely small population may persist in the Cimarron River in Oklahoma and Kansas, based on the collection of only nine individuals in 1985.