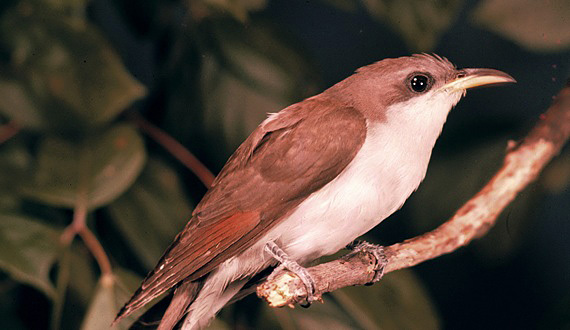 DESCRIPTION: The yellow-billed cuckoo is a robin-sized bird with a slender, long-tailed profile, a length of roughly 12 inches, and a weight of two ounces. The bill is stout, slightly down-curved, and blue-black with yellow on the base of the lower mandible. Plumage is grayish-brown above and white below, with red primary flight feathers; tail feathers are boldly patterned with black and white below. All adults have a narrow yellow eye ring. Gender or seasonal variations in coloration are not present, but females are larger than males.

MIGRATION: Cuckoos leave North America in August and head to their wintering grounds in northwestern Costa Rica, Panama, and west of the Andes in Columbia, Ecuador, and Peru. It is believed that western cuckoos migrate primarily to southern Central America, remaining along the Pacific, and down into northwestern South America, remaining west of the Andes.

BREEDING: Clutch size is usually two or three large, blue eggs with a breeding cycle of 17 days from egg-laying to fledging of young.

LIFE CYCLE: Males and females reach sexual maturity the first year after hatching. Females lay large eggs that allow for a short incubation period and more mature hatchlings. The pair constructs the nest upon which both will incubate eggs for nine to 11 days. Parents begin feeding hatchlings within one hour of hatching; by the second day, hatchlings are eating whole insects; by the third day, hatchlings are able to stand on the nest rim. At age seven to nine days, the young leave the nest, usually by running along tree limbs; the parents continue to provide food. Chicks will be able to fly between 17 and 21 days after hatching and within a few weeks will migrate to South America.

FEEDING: More than 75 percent of the yellow-billed cuckoo's diet is comprised of grasshoppers and caterpillars, though the species has been known to eat other insects such as beetles, cicadas, wasps, flies, katydids, dragonflies and praying mantids. The yellow-billed cuckoo is also able to eat toxic, hairy and spiny larvae like the tent caterpillar.

THREATS: The loss, degradation, and fragmentation of riparian habitat due to widespread logging, grazing, water diversion and pumping, agribusiness and urban sprawl pose serious threats to the yellow-billed cuckoo.

POPULATION TREND: The western subspecies of yellow-billed cuckoo has declined precipitously west of the Continental Divide and is now extinct in Alaska, British Columbia, Washington, Oregon and northernmost California.