GIVE TODAY
The Hollywood movie Hoot portrayed a group of school kids trying to save burrowing owl habitat in a small town in Florida. 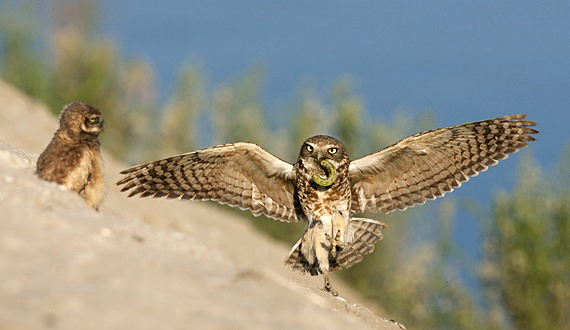 Athene comes from “Athena,” the name of the Greek goddess associated with the owl. The Latin cunicularus means “little miner.”

DESCRIPTION: Adult burrowing owls are from about seven to 10 inches in length, with a round head, white eyebrows, yellow eyes, and long legs. Burrowing owls are sandy colored on the head, back, and upperparts of the wings, and their under-parts are thickly spotted with whites and buffs. Adult females are slightly smaller and darker than males.

HABITAT: Typical burrowing owl habitat is open, dry, sparsely vegetated land with available burrows, adequate food supply, and perches for horizontal visibility. Although these owls are capable of building their own burrows, they generally prefer burrows abandoned by ground squirrels and other small rodents. Burrowing owls in California are found mostly in grasslands and along irrigation banks adjacent to intensive agriculture, in expansive grasslands, and in small patches of grassland surrounded by urban development.

RANGE: Western burrowing owls range from the Mississippi River to the Pacific Ocean, north into Canada and south to Mexico and western Panama. In California they are found throughout the Central Valley and in the northeastern and southern portions of the state. Breeding burrowers have been entirely eliminated from Napa, Marin, San Francisco, Santa Cruz, and Ventura counties, and are nearing extirpation in Sonoma, San Mateo, Monterey, San Luis Obispo, Santa Barbara, Orange, and San Diego counties.

MIGRATION: Northern populations of the western burrowing owl are migratory, leaving their breeding grounds each fall to winter in the south and returning north in the spring. However, most owls nesting in California remain there throughout the winter, sometimes staying in the same burrows and sometimes wandering within the region.

BREEDING: Burrowing owls are usually monogamous, but occasionally a male will have two mates. The nesting season is from February to August. Courtship displays include flashing white markings, cooing, bowing, scratching, and nipping; the male performs display flights. Eggs are laid a day apart, and are incubated by the female for 28 to 30 days. The male brings food to the female during incubation, and stands guard near the burrow by day. The male takes care of the young while they are still in the nest. Most breeding pairs fledge four or five young.

LIFE CYCLE: At two weeks of age, burrowing owl young may be seen roosting at the entrance to their burrow, waiting for the adults to return with food. They leave the nest about 44 days after hatching and begin chasing live insects when they are 49 to 56 days old. Burrowing owls can live for at least nine years in the wild.

FEEDING: Burrowing owls will capture a wide variety of prey, changing food habits as location and time of year determine availability. Large insects such as dragonflies and grasshoppers comprise most of their diet; small mammals like mice, rats, gophers, and ground squirrels are also important. Other prey animals include reptiles, amphibians, and small birds.

THREATS: California's remaining burrowing owls are threatened primarily by habitat loss to urban development, persecution of ground squirrels, and intensive agricultural practices. The state-approved practice of evicting owls from development sites is accelerating local extinction of owls from rapidly urbanizing areas. Other factors contributing to the decline of owls statewide include destruction of burrows through disking and grading, impacts of pesticides, increased predation by nonnative or feral species, habitat fragmentation, and other human-caused mortality from vehicle strikes, electrified fences, collisions with wind turbines, shooting, and vandalism of nesting sites.

POPULATION TREND: Surveys in the mid-1990s showed that an estimated 9,450 owl nesting pairs remained in the primary range of California burrowing owls. The number of breeding owl colonies located in the survey area declined by nearly 60 percent from the 1980s to the early 1990s, and the statewide number of owls is currently thought to be declining at about 8 percent per year due to urban development. Breeding burrowing owls have been extirpated from almost one-quarter of their former geographic range in California over the past two decades.