GIVE TODAY
White-flippered penguins usually keep the same mate from season to season. 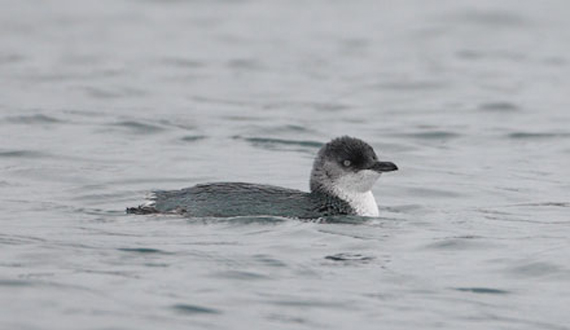 DESCRIPTION: One of the world's smallest penguin species, the white-flippered penguin has blue-gray dorsal feathers, a white underside, and distinguishing broad white trailing and leading edges. It has a body length of up to 16.1 inches and a weight of about three pounds.

HABITAT: White-flippered penguins find their optimum habitat in headlands, caves, and rock jumbles in sheltered areas at the bases of bays.

RANGE: The white-flippered penguin is endemic to Canterbury, New Zealand, breeding in significant numbers only on Banks Peninsula and Motunau Island. Range Map

BREEDING: The white-flippered penguin lays eggs from July to December, with the most egg-laying occurring August through November. Eggs are laid in a burrow lined with plant material or in hollows under bushes or rocks, in dunes, or on vegetated slopes, and are incubated for 33 to 39 days. Chicks fledge after 50 to 65 days.

LIFE CYCLE: This species first breeds at two to three years of age.

FEEDING: This species feeds on small shoaling fish such as pilchards and anchovies or cephalopods, and less often on crustaceans. Prey is caught by pursuit diving.

THREATS: The key land-based threats to this penguin continue to be predation by introduced predators and habitat degradation by human activities. At sea, white-flippered penguins have been frequently caught in nearshore set nets, especially around Motunau Island. A large oil spill would be disastrous to this penguin, and the threat is high because the birds nest in areas near shipping lanes. Like all penguins, this bird is also severely threatened by global warming, which reduces prey availability.

POPULATION TREND: White-flippered penguins have disappeared from much of their range since European settlement, and are in much-reduced numbers where they have survived. At the time of European settlement, the Banks Peninsula would have had tens of thousands of penguins, but settlement destroyed habitat and predators have overrun many of the remaining colonies. In one study, the aggregate number of nests declined from 489 to 85 between 1981 and 2000 — an overall loss of 83 percent. The most recent estimate of the total population is only 2,200 pairs.