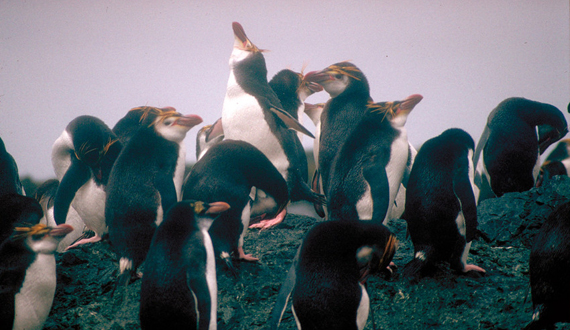 DESCRIPTION: The largest of the crested penguins, the royal penguin reaches about 26 to 30 inches in length and about 12 pounds in weight. It has black upperparts, white underparts, and distinctive yellow and black plumes on the top of its head. This penguin looks similar to the macaroni penguin but has a white instead of black chin.

RANGE: The royal penguin breeds on Australia's Macquarie Island and the nearby Bishop and Clerk islands. Range Map

MIGRATION: This penguin's ecology and movements during the winter when it is away from its breeding grounds are unknown.

BREEDING: Royal penguins breed in huge, high-density colonies during the spring and summer. Penguin pairs lay two eggs, which are incubated by both parents. Usually only one chick is reared, brooded by the male for the first 10 to 20 days while the female brings food. Chicks molt at about 60 days, after which they can fish on their own.

LIFE CYCLE: This penguin lives 15 to 20 years in the wild and reaches sexual maturity at seven to nine years.

FEEDING: The diet of the royal penguin is composed of krill, small fish, squid, and small crustaceans.

THREATS: Global warming is the greatest long-term threat to this species, with introduced predators, human disturbance, oil pollution, ingested plastics, and habitat loss also hurting the bird. Commercial fishing began near Macquarie Island in the mid-1990s and is expected to impact the krill, squid, and fish that royal penguins feed on.

POPULATION TREND: The royal penguin appears to have recovered from heavy exploitation in the 19 th century. Its current population appears to be stable. However, the royal penguin is particularly vulnerable because of its restricted breeding habitat, and is therefore susceptible to catastrophic declines from individual events or threats.