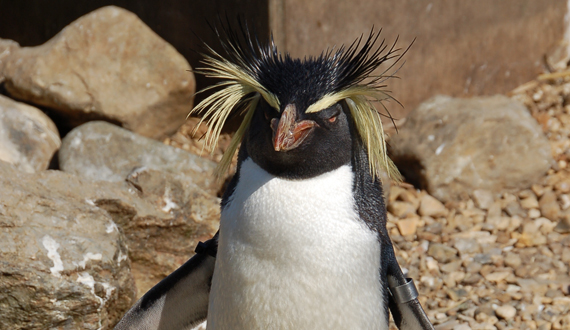 DESCRIPTION: This penguin has an average length of about 26 inches and weighs about 10 pounds. It has bluish-black to jet-black upperparts and white underparts and a wide, bright-yellow stripe originating over the eye and forming a short, erect crest.

MIGRATION: Erect-crested penguins do not come to land after their post-breeding molt, and their winter distribution at sea is unknown. Some birds molt regularly on sub-Antarctic islands south of New Zealand and, less commonly, on New Zealand's South Island.

BREEDING: These penguins are social and nest in large colonies in association with colonies of rockhopper penguins, albatross, and fur seals. Each breeding pair lays two eggs, the first of which is usually lost due to neglect, fertilization failure, or misdirection of a hormone signal. The second egg is up to twice the size of the first and is the only one seriously incubated. Chicks fledge in February and adults return to sea after molting in March.

LIFE CYCLE: The average lifespan of this penguin in the wild is 15 to 20 years.

FEEDING: Erect-crested penguins dine primarily on krill and squid, with some small fish included in the diet.

THREATS: This species' significant declines are attributed to major global-warming-induced changes in the marine environment that have reduced overall productivity and penguin prey. This penguin is also threatened by competition with and bycatch by commercial fisheries, nonnative predators, disease, disturbance, oil spills, and pollution.

POPULATION TREND: The erect-crested penguin has experienced rapid past and current decline. In 1978, researchers estimated that the Bounty Islands and Antipodes Islands each contained 115,000 pairs. In 1995, ground surveys on Antipodes Island indicated that only 49,000 to 57,000 pairs remained — a decline of roughly 50 percent in 20 years, with further losses sustained since. Even worse, a survey in 1997 and 1998 revealed just 28,000 breeding pairs on the Bounty Islands, about a 75percent decrease since 1978. A small population on Campbell Island numbered 20 to 30 pairs in 1986 and 1987, but is now most likely extirpated.