GIVE TODAY
Fiordland crested penguins live to be between 10 and 20 years old. 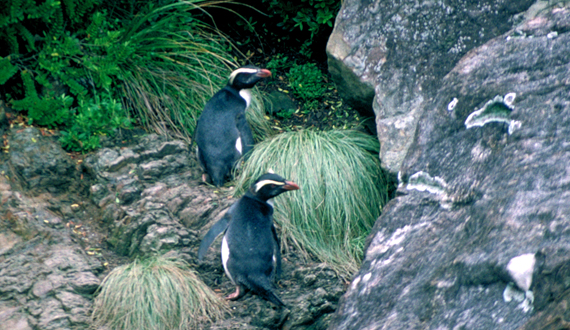 DESCRIPTION: The Fiordland crested penguin grows to be about 24 inches in length and weighs about 8.2 pounds. It has dark, bluish-gray upperparts, white underparts, a dark gray head, and a wide yellow eyebrow stripe extending over the eye and dropping down the neck to form a crest. Most birds have three to six whitish-colored streaks on their cheeks.

HABITAT: This penguin breeds and nests in cold, dense temperate rainforests and feeds in pelagic waters.

BREEDING: The breeding season begins in June, with breeding taking place under high rainforest canopy in dense shrub, under boulders, and in caves. Colonies usually consist of loose groups. Two eggs are laid, but only one chick usually survives.

LIFE CYCLE: This penguin lives to be between 10 and 20 years old.

FEEDING: This species feeds on fish, squid, octopus, and krill.

POPULATION TREND: Early exploitation by Europeans and predation by introduced predators extirpated this species from much of its range throughout New Zealand. Based on a series of surveys conducted in the 1990s, the population is estimated at only 2,500 to 3,000 breeding pairs, and severe population declines have been recently observed.