GIVE TODAY
Bald eagles earned their name because of their white heads: balde is an Old English word for "white". 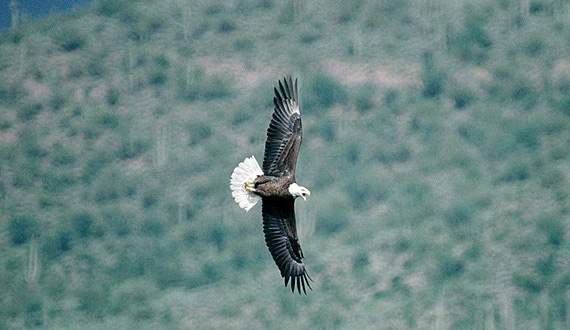 DESCRIPTION: The bald eagle is a large raptor with a wingspread around seven feet. Adults have a dark-brown body and wings, a white head and tail, and a yellow beak, with females larger than males; juveniles vary in color, but are mostly brown with white mottling. Desert nesting bald eagles are smaller than other bald eagles, weighing about three-quarters of what California eagles weigh and even less in proportion to Alaskan bald eagles.

RANGE: Desert nesting bald eagles live along the Salt and Verde rivers in Arizona; historically, they also settled in New Mexico and Texas, west of the 100th meridian.

MIGRATION: Juvenile desert nesting bald eagles have been observed to migrate from the Verde River far north to such locations as the mouth of the Klamath River in northern California, Yellowstone Lake in Wyoming, and Swan Lake in Manitoba, according to a study by the Southwestern Bald Eagle Management Committee . Researchers believe that two- and three-year-old subadults also migrate north annually, returning in fall. Breeding adults stay near their nests year-round, though some have traveled to the White Mountains and Flagstaff-area lakes briefly during the summer.

BREEDING: One to three eggs are laid from December to March and take 35 days to hatch. Adults share nesting duties until eaglets fledge around 12 weeks of age; fledglings are dependent on adults for food until they migrate north, about 45 days after fledging. Arizona bald eagle nests are most commonly placed on cliff ledges, rock pinnacles, and in cottonwood trees. Productivity rates in Arizona are lower than those recorded throughout North America.

LIFE CYCLE: After leaving the nest around 18 weeks of age, eagles reach sexual maturity around their fourth or fifth year. They tend to live between 20 and 30 years in the wild, though in rare cases individuals can hit the 50-year mark.

POPULATION TREND: Desert nesting bald eagles were first observed in 1890 at Stoneman Lake, and again in the 1930s by workers building Stewart Mountain and Bartlett dams. Further reports remained sparse until 1970, when surveys began. Between 1970 and 2006 the observed population increased from three breeding pairs to 43 breeding pairs due to elimination of DDT, habitat protection, and artificial boosts to reproduction through a nest-watch and fostering program . The population is still very small, however, and population viability analyses predict that without continued protection and management, the eagle will go extinct within the next 75 years.