GIVE TODAY
Found nowhere outside Ecuador, the black-breasted puffleg is a small to average-sized hummingbird with distinctive white leg plumage. 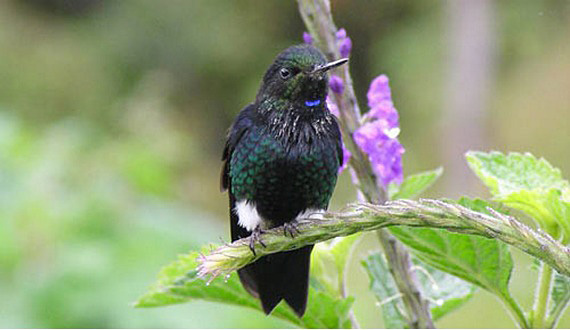 DESCRIPTION: Reaching about eight centimeters in length, the black-breasted puffleg is a small to average-sized hummingbird with a dark, steel-blue, forked tail and straight black bill.

HABITAT: This bird's habitat consists of humid cloud forests in the high Andean mountains. Its primary nectar source is the small rubiad tree (Palicourea huigrensis), though it also feeds on the flower nectar of other plants, including Thibaudia floribunda and Psychotria uliginosa. Ninety-three percent of its remaining habitat in the elfin forests along the northern ridge-crests of the Volcán Pichincha has been destroyed.

RANGE: The black-breasted puffleg's range is very restricted; it is found only on the northwestern slopes of Ecuador's Pichincha volcano, an area of less than 34 square kilometers.

BREEDING: The bird is thought to breed from October to March, producing two eggs.

LIFE CYCLE: A healthy hummingbird's lifespan is five to 10 years.

FEEDING: The black-breasted puffleg feeds in a wide variety of microhabitats from understory nectar sources. Its favorite nectar source appears to be the small tree Palicourea huigrensis.

THREATS: Most of the puffleg's habitat has been deforested by cattle grazing, the establishment of potato farms, and the felling of Polylepis trees for charcoal production. A recently constructed oil pipeline and accompanying road also threaten its habitat. Making matters worse, the bird is in increasing danger from global warming — if temperatures rise much more in its range, it will eventually be unable to climb higher in search of cooler habitat.

POPULATION TREND: The black-breasted puffleg is rapidly declining. In fact, its population is estimated to have declined by 50 to 79 percent in the past 10 years and now consists of fewer than 250 individuals.