GIVE TODAY
Certain points on migration routes are known as "eider passes." One observer reported 75,000 eiders passing the Yukon Delta on one day. 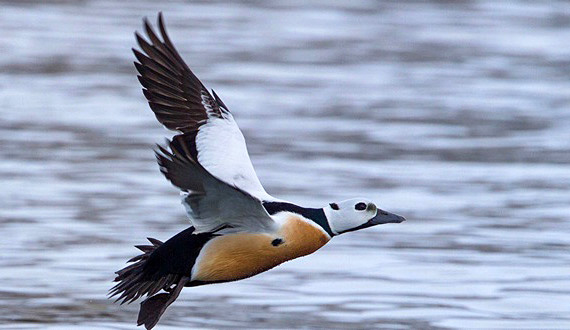 A year-round inhabitant of the Arctic, the Steller's eider is known as “the bird that sat in the campfire” by the Inupiat Eskimo — a reference to the burnt coloring of the male eider's underside. With abundant body fat and thick insulating plumage, this rare sea duck is built for life in the tundra. But the Arctic may be getting too warm for the Steller's eider, and the species is rapidly declining.

The Steller's eider is one of several Arctic species the Center has worked to protect. Following a formal threat of litigation, the U.S. Fish and Wildlife Service listed the Alaska population under the Endangered Species Act in 1997. As a new wave of oil development got underway in this small sea duck's habitat, the Center sued the Service to force the agency to designate increased protection.

In keeping with a settlement agreement with the Center and Christians Caring for Creation, the Service initially proposed 25,000 square miles as critical habitat for the Steller's eider. But when the agency made its final designation the following year, the area defined as critical habitat had shrunk to 2,830 square miles of ocean and 852 miles of Alaska shoreline. This proved to be an early example of the attacks endangered species would endure in the coming years of the Bush administration.

The Steller's eider faces many threats, primarily oil and gas drilling. In 2006, we blocked oil leasing in important eider habitat, and the next year, we successfully interrupted plans by Shell Oil to begin exploration near the Arctic National Wildlife Refuge. Additional oil development is planned, and we're in court to block reckless proposals.