GIVE TODAY
This bird is unique because of its intimate association with glaciers, but the effects of climate change are dramatically apparent in Alaska and are hitting the Kittlitz's murrelet especially hard. 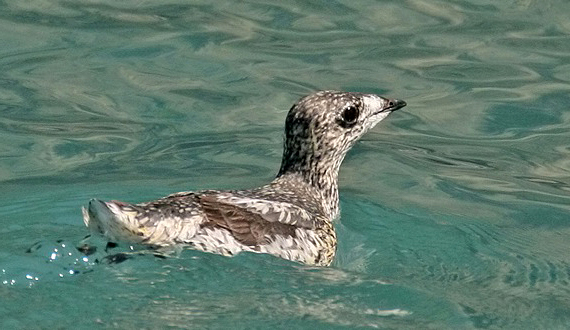 Possibly the most mysterious American seabird, the Kittlitz's murrelet nests in remote, solitary places high in rugged coastal mountains and has always been difficult to spot — in fact, since the species' discovery, scientists have documented only a few dozen of its nests. This bird is unique because of its intimate association with glaciers, but the effects of climate change are dramatically apparent in Alaska and are hitting the Kittlitz's murrelet especially hard. Rapidly rising temperatures are shrinking the seabird's glacial habitat, and changes in the ocean are reducing the availability of the fish it eats. In addition, the species is directly affected by human activities like cruise-ship disturbances, which cause it to abandon feeding areas, and commercial gillnet fishing, which often kills birds as bycatch. The 1989 Exxon Valdez oil spill had a catastrophic affect on the Kittlitz's murrelet, destroying as much as 10 percent of the world population.

In 2001, the Center, the Coastal Coalition, Eyak Preservation Council, Lynn Canal Conservation, Inc., and the Sitka Conservation Society formally petitioned the U.S. Fish and Wildlife Service to list the Kittlitz's murrelet as endangered under the Endangered Species Act. The petition also requested that critical habitat be designated for the bird. But while the Service acknowledged the species' peril, declaring that its sharp decline justified listing, the agency refused to grant the bird any protections by naming it a candidate species whose listing was “precluded.”

In 2005, the Center filed suit to force the Service to fully protect the Kittlitz's murrelet — and 282 other imperiled candidate species — under the Endangered Species Act. Four years later, we petitioned Alaska to protect the bird under the state's Endangered Species Act — but the state scorned our petition in April 2009. Fortunately, in 2011 we reached a landmark agreement with the Fish and Wildlife Service compelling the agency to move forward in the protection process for 757 species, including the Kittlitz's murrelet. The agreement called for a federal listing proposal by 2013.

OTHER
MAP: Distribution of the Kittlitz's murrelet